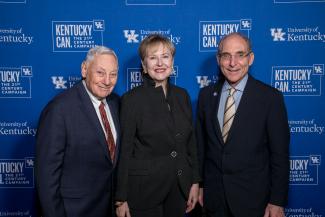 Sandy Helton, a 1971 mathematics graduate, spoke to alumni, friends, parents and community members on behalf of Kentucky Can: The 21st Century Campaign in June 2019 at an event in Chicago. She discussed how her University of Kentucky education prepared her for the workforce and how she hopes to empower future students by supporting the university and campaign.

Good afternoon, my name is Sandy Helton, and I graduated in 1971 from the University of Kentucky College of Arts and Sciences with a bachelor’s in math. At the time, it was unusual for a woman to major in math, and often I was one of the only women – if not the only woman – in my classes.

My UK education challenged me and gave me the opportunity to diversify. I earned enough credits to minor in psychology, economics and computer programming, all of which provided me a springboard for a career in the corporate world.

For 26 years, I worked at Corning. I served in several senior leadership roles, many of which had global responsibilities. As I advanced in the company, I found that many people were unfamiliar with UK’s academic reputation. People knew it was a good basketball school, but they were unsure if UK graduates would be competitive with other academic powerhouses.

I wanted to change that. At the time, Lee Todd was president of the university and Mark Kornbluh had recently become dean of the College of Arts and Sciences. Both shared my vision for UK. They pushed for academic excellence and valued gender and racial diversity. Dean Kornbluh wanted to offer students international opportunities, where they could broaden their worldview and gain a global perspective that would serve them well in the corporate marketplace.

I am pleased that President Capilouto has furthered this agenda of academic excellence and has promoted diversity and inclusion throughout campus.

I have always felt that diversity – racial, gender and diversity of experience and thought – enrich everyone’s college experience. It gives them a better perspective, helps them to challenge their belief system and makes them more accepting of others. Similarly, seeing the world and other cultures through international programs helps students to become better citizens who make good decisions, support their local communities and appreciate the broader scope of their actions.

Though I have always supported UK, I began making more significant gifts to ensure Dean Kornbluh’s initiatives and programs continued even after he left the university. It is also why I am serving on the College of Arts and Sciences Campaign Committee. I want every student with the ability and willingness to work hard to have the opportunity to access a UK education and to gain the skills and perspective I did so that they can thrive in the global marketplace.