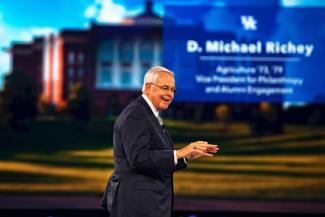 In an email to campus this morning, President Eli Capilouto announced vice president for philanthropy and alumni engagement Mike Richey is retiring January 2, 2021.

This morning, I have the bittersweet responsibility to tell the UK community that Mike Richey is retiring at the end of 2021 as UK’s vice president for philanthropy and alumni engagement.

In the coming weeks, I will name a broad-based committee to launch a national search to help me try to fill this critically important role. We won’t be able to replace Mike. No one can. But the foundation of excellence that he has built puts us in an enviable position to attract incredible talent.

Mike came to UK as a young student in the fall of 1969 from his native Muhlenberg County. He never left UK, and this university, of course, never left him. Along with his family, UK became his life’s passion.

He worked in what is now the College of Agriculture, Food and Environment for 25 years, serving for several years in student affairs before becoming the college’s first philanthropy officer.

He helped start the Ag. Roundup, created numerous groundbreaking philanthropy efforts and mentored scores of students, more often than not who came to UK from small towns. He nurtured their dreams and challenged them to think about how they could give back to their native state.

Mike came to central Philanthropy in 1998 to help run UK’s first-ever development campaign. At the time, the successful $1 billion campaign was the first of its kind by a public university. During his tenure, UK has raised more than $2.5 billion to support scholarships and infrastructure, faculty talent and myriad programs and initiatives that would help change –- in so many positive and transformative ways –- the trajectory of our university.

Over the last several years, Mike has led our current campaign – Kentucky Can – which has raised more than $1.6 billion of our $2.1 billion goal. With more than 142,000 donors to this point, this campaign is helping ensure, among many other things, that more young people from our state will come to UK, without debt, to pursue their Kentucky dreams.

So many times, I’ve seen the fruition of those dreams and Mike’s role in making them reality.

In 2012 after tornadoes and storms ripped through West Liberty, leaving devastation in their wake, I reached Morgan County Extension Agent Sarah Fannin by phone.

There, in her home, Sarah and her colleagues had established a makeshift extension office. Their offices in West Liberty had been leveled along with much of the tiny Eastern Kentucky town. But there was no time for them to lament their losses. There was too much work to do, helping a community recover.

A couple of weeks ago, I visited Sarah and her colleagues in their rebuilt offices in West Liberty. We talked about progress made and current activities for an office so ingrained in the life of this mountain community. She reminded me that as a student in UK’s College of Agriculture more than 25 years ago, she had worked for Mike Richey.

That experience, and the mentoring and support she received during a tough time in her young life, were formative. Her family had recently moved back to Eastern Kentucky, and with the help of our extension services, had learned new ways to farm and hopeful ways to build a life as a family.

An unfolding cycle of concern and commitment paid forward over decades that changes lives and communities. That’s what we hope to do at UK.

So many stories about Mike, like those that Sarah Fannin reminded me of, linger and live in my mind’s eye.

UK has “been a major part of my life,” Mike has been heard to say often. His heart and his soul, he would quickly add, are with Kentucky.

No one would ever challenge those statements. And we are so much better for it.