'Kentucky Can' Campaign Kicks Off in Cincinnati, NKY 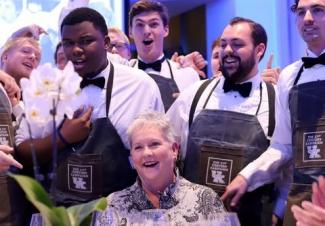 The Roebling Bridge between Northern Kentucky and downtown Cincinnati was under construction in 1865 when the University of Kentucky was opening its doors for the first time.

When the Roebling opened, it was the longest suspension bridge in the world and was designed to power a regional economy.

“It is symbolic of what we do each day as bridge builders entrusted with unleashing the potential of our students and Commonwealth,” Capilouto said recently in front of nearly 200 people who gathered on a stormy night in downtown Cincinnati. “You are a part of that work, and we are honored that you are joining us on this special evening for the University of Kentucky family. You are the UK story. Each of you is part of a history marked by resilience and shaped by an unyielding and compassionate commitment to those we serve.”

UK’s work and its story are the center of the recently launched $2.1 billion comprehensive fundraising campaign — Kentucky Can: The 21st Century Campaign. In early November, the campaign began its regional and national push in front of a packed house of donors, alums and other members of the UK family at Anderson Pavilion in Cincinnati.

“Today, informed by that past, we are focused on the future. We are asking ourselves a fundamental question,” Capilouto said. “What does it mean to be Kentucky’s university in the 21st century?”

That future and the campaign, Capilouto said, will focus on a number of key initiatives, including:

Rodney McMullen, CEO of Kroger, said “the University of Kentucky was a catalyst for my personal and professional success … My story is no different than many of UK’s students. Like me, they are driven, hungry for an education, and eager to make a difference. And Kathy (McMullen) and I want to help them on their journey.”

Indeed, one of those students, Jessica Waters, told the audience that she loved UK from her first campus tour, but knew that scholarships would be instrumental in whether she could attend.

“For many years, I suffered from epilepsy. Nearly all of the money my parents had saved for college was drained to pay for my treatments,” she said. “Your support allowed me to serve as president of Delta Delta Delta Sorority. As a senior, I am earning credits toward my master’s degree without worrying about graduating with overwhelming debt.”

And Dr. Mark Newman, UK’s executive vice president for health affairs, said the Kentucky Can effort will be vital to continue funding research aimed at “uncovering the causes and potential prevention techniques” that will cure disease and end suffering across the state.

Pointing to a partnership with St. Elizabeth Healthcare in Northern Kentucky to create an additional College of Medicine campus in the region, Newman said new treatments can be utilized throughout the state “so that we can improve the well-being of our citizens, now and in the future.”

After all, that ability to impact the future — the question of what it means to be Kentucky’s university in the 21st century — should be at the heart of everything this campaign is focused on and what UK does in its role as the state’s flagship, land-grant institution.

“I am able to conduct research that is not only preparing me for graduate school, but for a lifelong career in education policy,” said Susie Smith, a political science senior who spoke at the regional kickoff in Cincinnati. “I want the same opportunities for everybody. Your gift — and others like them — will enable me, as an educator, to expand opportunities to those I serve.”