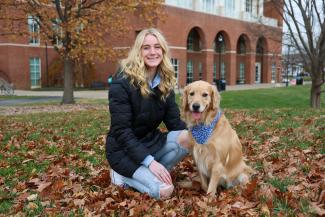 Charlotte Seeger loves helping people, particularly those experiencing trauma or difficulty like cancer or post-traumatic stress syndrome. In fact, her deepest connections to the University of Kentucky have come through organizations and initiatives directed toward service and making life better for individuals and families who are suffering.

A junior from Bardstown, Kentucky, Charlotte has participated in DanceBlue, UK’s 24-hour dance marathon that fundraises to fight pediatric cancer, and Camp Kesem, which raises money to send children who are affected by a parent's cancer to a week-long summer camp free of charge.

Yet Charlotte says none of it would be possible without the Don and Mira Snider Ball Scholarship, which she began receiving before the second semester of her freshman year. The Ball Scholarship is part of the UK LEADS program (Leveraging Economic Affordability for Developing Success) and is designed to increase the availability of need-based financial aid for meritorious students to improve student retention and graduation rates.

“This has been very, very, fulfilling for me. From the time I met the first class onward, it appealed to me,” says Mira Ball. “I’m very glad our retention rate is going up. It’s very important.”

“Without the Ball Scholarship, I definitely would not be as involved as I am. My first semester, freshman year, I did work and tried to juggle school at the same time. It was a lot to take on. Now, I’m able to enjoy school, focus on getting good grades and keep broadening my horizons,” Charlotte asserts.

Charlotte’s connection to UK began before she arrived on campus. During a visit, she met leaders from the 4 Paws for Ability student organization, through which students help socialize dogs for future service. More importantly, Charlotte met the dogs. As someone who grew up with five canines, she was quickly hooked. Charlotte served as a sitter for two years, and a foster parent for one, taking her dog to class, around campus—any activity that would help it get used to being around people.

“It’s the best thing I’ve been involved in at UK,” Charlotte affirms.

In fact, Charlotte came to UK with a plan to major in animal sciences and become a veterinarian. Two years into her program, however, that dream came to a sudden, unexpected end.

“I had an internship where I was to shadow a vet for four weeks. She had surgeries scheduled throughout the day and, during the first one, I passed out. I thought, that might be a fluke, but then I passed out again. I can’t handle blood and surgeries.”

Feeling somewhat lost, Charlotte began exploring other majors. She loved nutrition and fitness and eventually discovered dietetics. Because Charlotte was already two years into her other degree program, she took four summer classes to stay on track.

“After I realized I couldn’t be a vet, I was sad. But I think God has ways of putting us on different paths and I can now say I was meant to be a dietician.”

Her vocation might be new, but familiar themes are shaping it.

“I really like oncology dietetics—working with cancer patients. They lose a lot of weight because food doesn’t taste the same as it did, especially when they’re going through chemotherapy.”

Thanks in large part to the Ball Scholarship, Charlotte has enjoyed the time and space necessary for linking her passions to life as a student and her future career.

“My experience at UK has been great. I feel connected here, like I belong. I know I made the right decision coming here. I chose UK, but really, UK chose me.”