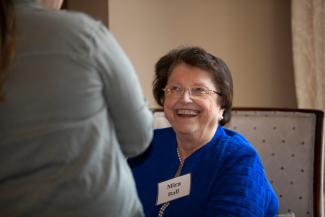 The University of Kentucky Board of Trustees today approved the naming of a campus facility and an athletics complex in connection with the generosity of two major donors to the university.

Woodland Glen II residence hall will be renamed Don and Mira Ball Hall for their longstanding philanthropic service to UK. UK Athletics’ baseball, soccer and softball athletic complex on Alumni Drive will be named the Barnhart Family Athletics Complex at the request of Vickie and Wendell Bell, important supporters of UK Athletics. The Advisory Committee on Naming University Property recommended approval of the name recognitions.

Mira and Don Ball, who established the Lexington based homebuilding company Ball Homes, are alumni of the University of Kentucky. Mira Ball was the first woman to serve as chair of the UK Board of Trustees and was inducted into the Alumni Association’s Hall of Distinguished Alumni in 2010. She and Don Ball received honorary doctorates in 2016.

Their total philanthropic support for the university to date totals approximately $15 million.  Following Don’s death in 2018, Mira made a gift of $10 million going to the UK LEADS (Leveraging Economic Affordability for Developing Success) scholarship initiative. LEADS scholarships provide unmet financial need that might otherwise put academically successful students in jeopardy of not completing their degrees.

“The Ball family’s support of the university has been unwavering,” said UK President Eli Capilouto. “From their financial gifts, to Mira’s superb leadership of the Board of Trustees, to their interaction with students who benefited from their generosity, Mira and Don have been indispensable members of our UK family. We are proud to name this residence hall in their honor.”

For nearly 25 years, Vickie and Wendell Bell have been involved in and devoted to the UK Athletics program. Their financial gifts to the program have totaled more than $9 million, Vickie Bell has served as a volunteer with UK’s rifle program, and they joined UK athletes in service, traveling with them to Ethiopia three times. The Bells are constant fixtures at soccer, rifle, volleyball, football and basketball events, and the Wendell and Vickie Bell Soccer Stadium is named in their honor.

As part of their latest gift to UK Athletics, the Bells requested that the baseball, softball and soccer complex be named in honor of the long-standing service and commitment to the UK student-athletes by UK Athletics Director Mitch Barnhart and his wife Connie Barnhart.

University policy does not consider nominations of persons on active service with UK, especially where that service is to be performed in a building so named, except in the most extraordinary cases. The Advisory Committee on Naming University Property felt this situation fulfills the “extraordinary cases” clause as the donor’s gift was contingent on the naming.

Capilouto said he agrees with the committee. “Vickie and Wendell Bell root for all UK sports. But they also became deeply devoted to sports that often aren’t played in the limelight, in front of thousands of fans or on national TV. Mitch and Connie Barnhart’s passion for all of our sports — and all of our student athletes — has inspired the Bells’ giving in this way. That is extraordinary. And, in my judgment, meets the definition of extraordinary asked for in our regulations regarding these kinds of gifts.”