A Man of Vision: Alumnus Supports Engineering Students Through Estate 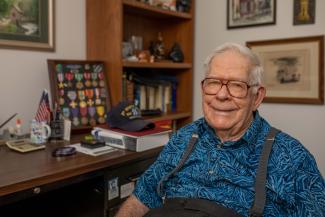 Carl and Betty McHargue’s $2 million estate gift will endow a new scholarship fund for engineering students in eastern and southeastern Kentucky. His gift is the pinnacle of an extraordinary life.

By Kelly Hahn
At age 93, Carl McHargue has seen and experienced enough to fill several volumes of memoirs: fighting in World War II, the Cuban Missile Crisis, the golden age of a renowned national laboratory, research on every continent except for Antarctica and a marriage of nearly 59 years. Trace the themes and turning points of his life, and the composite picture reveals a man of vision.

Ironically, he owes most of his success to his poor eyesight. It all began in 1944 when he and four Corbin, Kentucky, classmates were preparing to leave to serve in World War II. At the time, all soldiers who wore prescription eyeglasses had to have a gas mask with prescription lenses.

“As I was getting on the truck, they discovered my gas mask didn't have lenses with my prescription after all,” McHargue says. “So, they yanked me off the shipment, and the four guys from Corbin went to Europe. It turned out to be fortunate for me. The enemy killed one, took two prisoners and wounded one so severely that he spent over a year in the hospital. Not having prescription lenses may have saved my life.” McHargue shipped out 7 days later.

It also began a legacy of service; one that will continue in perpetuity. McHargue, a three-time graduate of the University of Kentucky, and his late wife, Betty Ford McHargue (1930-2019), are leaving $2 million to UK to support engineering students. The Carl and Betty McHargue Scholarship Fund provides scholarships for students from eastern and southeastern Kentucky and gives preference to materials engineering majors.  This generous estate gift builds on over $20,000 the McHargues have already given to support engineering education.

“UK really emphasizes teaching, not just research, and that’s always been important to me,” says McHargue. “I hope that these scholarships will help fill the gap for students in need.”

Now a resident of Knoxville, Tennessee, McHargue was a trailblazer at UK. After serving for two years in World War II – where he received a citation for the Silver Star, the third-highest personal decoration for valor in combat – he enrolled at UK using the GI Bill.

Sharing a basement in a house with other former GIs, he began studying engineering with an emphasis on chemistry. During his first semester, his classmate introduced him to a metallurgy course of study led by Professor Charles Crouse.

McHargue completed his bachelor’s degree in metallurgical engineering in 1949 and commenced a master’s program in the same field shortly after. As he came closer to graduating, Dean D. Terrell and Crouse devised a plan to establish a Ph.D. in engineering. They asked McHargue to become the first engineering doctoral student at UK. He agreed.

However, the University Senate debated for a year whether to approve the program. In the meantime, McHargue continued taking graduate courses and working on a dissertation for a degree that hadn't yet received approval.

“That kept me up a few nights,” he remembers.

“The University of Kentucky had one of the first Air Force contracts to study the fabrication of titanium for aircraft, and the work at ORNL was an extension of my doctoral thesis to uranium,” McHargue says. “So, I figured I could go in and start doing something with which I was familiar.”
McHargue joined the staff of ORNL in 1953, where he held various research and management positions until his retirement in 1990.

A man of vision, he pioneered new advances at ORNL. As manager of materials sciences, he developed one of the most extensive programs in basic materials research in the United States and made significant contributions to the understanding of irradiation effects in solids. His work on textures at ORNL forms the basis of modern practice, and he performed revolutionary work in phase transformations of rare-earth metals, plastic deformation of metals and ceramics, diffusion, and radiation damage.

McHargue also initiated the materials development program in support of the Fusion Energy Program, as well as initiatives to support other advanced energy systems. For his work, he received induction as a Fellow of The Metallurgical Society in 1978, which is the society’s highest honor and is limited to 100 living members with no more than five awarded per year. The UK College of Engineering inducted him into the Hall of Distinction in 1995. His work in international engineering education led to Honorary Membership in the Order of Engineers (Portugal) and Fellow of ABET, Inc.

“Collaboration is the key,” McHargue says. “If you convince someone with a technique or a piece of equipment that you have a good idea, next thing you know they'll be willing to collaborate. You provide the samples and tell them what you want, they do the work, and then together you make the interpretation. One day, I looked at my publication list, and it showed 80 collaborators from all over the world. I have papers on all sorts of techniques, and I don't even know how to turn on the machines! But I had the idea. One of the lab’s associate directors once told me, ‘You're not a researcher; you’re a research broker.’”

Although McHargue accomplished much at ORNL, his greatest discovery was Betty Ford, who became Betty McHargue in 1960. Betty worked at ORNL for 31 years in various administrative capacities, even serving as assistant to the lab director which gave her several dealings with former President John F. Kennedy, who worked with ORNL to prepare a defense in the event of a nuclear war.

When the Cuban Missile Crisis intensified, President John F. Kennedy persuaded Eugene Wigner, 1963 winner of the Nobel Prize for Physics, to lead the study. The lab assigned Betty as his secretary. At their first meeting, Betty learned that Wigner’s apartment had no telephone.

“She called the telephone company and said, ‘Do you want us to tell President Kennedy he couldn’t get in touch with Dr. Wigner because you couldn’t get around to putting a telephone in?’”

Shortly after McHargue arrived at ORNL, the University of Tennessee at Knoxville President Andy Holt and ORNL director Allen Weinberg began strategizing how to strengthen the science and engineering programs at UT. Their solution: give scientists at Oak Ridge joint faculty appointments and let them split their time between the lab and UT.

McHargue, who had recently taught a graduate course in metallurgy and an undergraduate course in thermodynamics at UT, served on the committee that oversaw the implementation of the program. While he retired from ORNL in 1990, he kept the teaching appointment until 2016 – around the time he turned 90. From 1991 until 2012 he also served as Director of the Center for Materials Processing at UT.

One of McHargue’s favorite assignments involved students writing about something that works because the material fails.

“They would just look at me like I didn’t know anything,” he says, grinning. “But think about it. Breakaway bolts that hold up streetlights on the interstate are designed to fall when hit because it creates less impact on the passengers. Sprinklers work because the fuse melts. There are even industry standards for jawbreakers -- I learned that from one of my students!”

After spending decades instructing UT students in the classroom, McHargue understands the need for student scholarships. He saw how some students struggled to pay their tuition and hopes the Carl and Betty McHargue Scholarship Fund will provide more UK engineering students the support they need to be successful.

Sadly, Betty McHargue passed away in June, a few months shy of their 59th wedding anniversary. Along with a spunky Chihuahua named Peanut, McHargue lives in the couple’s longtime single-story house, where the tiny canine is particularly fond of burying bones between couch cushions. McHargue may be retired, but that doesn’t mean researchers in his field have forgotten him. He has consulted with the U. S.  Army Missile Defense Command and Apple Inc.

“Last year I got a call from somebody at Livermore National Laboratory who was studying Plutonium,” McHargue relates. “He started asking me questions about work my group had done using Cerium. What did the data show us? I said, ‘Look, man, we were working on that 1960 and I haven't looked at it since…but I'll see if I can find my papers and get back to you!’”