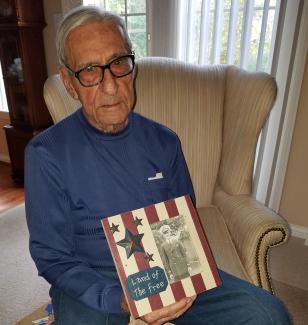 A flock of wooden eagles perch atop Roy Hunt’s cabinets. They are watching over a true patriot, one of the last remaining World War II veterans.

In his 97 years, Hunt has witnessed history. He served as an officer on the U.S.S. New Mexico, a ship that escorted the U.S.S. Missouri into the Tokyo Bay for the Japanese surrender. Traveling throughout the Pacific, the Louisville native saw wide swaths of the country as he collected information from ships in the area and analyzed their data and lived through a kamikaze attack on his ship.

But, he seems unfazed by all of it. To the 1943 graduate of the College of Agriculture, his historic experiences were all in a day’s work.

“It was sort of a typical day,” he said of the Japanese surrender. “We had a destroyer on one side and land on the other. We knew the Japanese did not have anything in their back pockets and were ready to totally surrender. That day, there was no more excitement on the ship than any other day. We were just escorting a ship like we had done before.”

Throughout his UK career, World War II loomed over campus. Many students participated in military-based clubs. The university began graduating students quarterly to allow them to enter the military and ship out.

But even before the war, Hunt knew he was destined to the join the Navy. The first in his family to serve, Hunt grew up near what is now Fort Knox on Highway 60. After the U.S. Army purchased an additional 40,000 acres, they became Hunt’s neighbors. He heard their drills, saw their vehicles run by his farm and met many Army and National Guard members in local stores.

“They were not good neighbors,” Hunt said. “When I was 12, I decided I would go into the Navy.”

After his May UK graduation, he left Lexington to immediately attend basic training at Columbia College in New York and set sail for the Pacific.

“We spent a lot of time at sea and saw little combat, but being an officer in the Navy was better than being a foot soldier,” Hunt said. “At least we had a clean place to eat and sleep.”

As an ensign, Hunt was a relatively low-ranking officer, but on his ship, he reported to the commanding chief. It was a position of prominence and a leadership role that mirrored his experience at UK. In his three years on campus, Hunt was a member of Alpha Gamma Rho, Student Government Association, Block and Bridle, Perishing Rifles, among other organizations. His face was ever-present in his 1943 yearbook, though Hunt claims he did not have as much time to get involved on campus as he would have like. He worked at night for the Lexington Leader newspaper, starting as a carrier and working his way up to manning the front desk.

He was focused on earning his degree, which aided him after he returned from the war. He grew Hunt Tractor, a small company started by his father in 1922 in Meade County, to a corporation that served Central Kentucky and Southeastern Indiana as well as ventured into property management and leasing. The company bought houses in Louisville and sold or leased them to other businesses that needed office space.

“It was not a full-time operation until I took it over,” Hunt said. “We grew our clientele by visiting stock yards and farms throughout Central Kentucky. My brother was a great mechanic, but he had no business sense. I could operate machinery, but when it broke down, I needed his expertise. So, we complemented each other.

“When I wanted to expand the business, we compromised,” Hunt said. “We continued to sell tractor parts, farming machinery and anything you would need to cultivate or harvest, but I recognized the value in having good property and began buying lots and houses throughout the Louisville area.”

Hunt saw the company as a way to give back to his community, but it also was a way to sustain family farming, an industry that he sees diminishing. By growing the business, Hunt could pay homage to his father and provide for future generations. His son now runs Hunt Tractor.

“I encourage all students to take agriculture classes, because it is an important industry,” Hunt said. “It is where we get our food, where we get our clothes. These things do not just come out of the ground. They have to be cultivated, processed, prepared and sold. It is important that young people – all people – understand the importance of agriculture.”

Through his generosity, Hunt has ensured UK students studying agriculture have more opportunities. He has regularly supported the College of Agriculture, Food and Environment, helped fund construction at his fraternity house, provide scholarships to undergraduate students  from Jefferson County and contributed to funds helping programs across campus. His gifts benefit Kentucky Can: The 21st Century Campaign, UK's comprehensive campaign focused on increasing opportunities for student success, funding innovative research, improving health care, strengthening our alumni network, and supporting our athletic programs. Already halfway to its $2.1 billion goal, Kentucky Can’s impact can be felt across campus. More than 130,000 donors have contributed to the campaign, making education more accessible for students and helping the university achieve record-high graduation, retention and enrollment rates.

“I have had a good life,” Hunt said. “I have met a lot of great people and seen a lot of interesting things. By giving back, I am helping others to have the opportunities I had.”