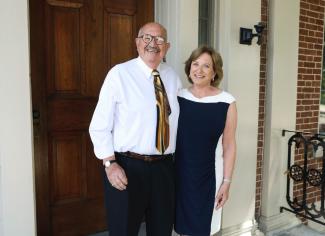 Like many preteens though, Kaufmann had other ideas of how he would prefer to spend his time.

But what started out as an inconvenience, eventually would spark an appreciation for great music in the high school cornet player and a love for such masterpieces as “Rhapsody in Blue.” And a family tradition of service and philanthropy would later fuel a desire to champion the arts.

Building on that family practice of patronage as longtime supporters of UK College of Fine Arts, Kaufmann and his wife, Janet Zusman, have committed to establishing the Ben C. Kaufmann and Janet Zusman Music Fund in the School of Music.

In over 30 years of philanthropic support to UK, the couple’s nearly $400,000 in lifetime giving and new pledge commitments will now include a $6.6 million deferred gift — the largest gift in the history of UK College of Fine Arts and among the largest donations to the arts in Central Kentucky.

“We want our gift to spotlight the importance of the College of Fine Arts and the School of Music in our community. I want to inspire others to join us as benefactors,” Kaufmann said. “As a member of the College of Fine Arts Kentucky Can campaign committee, it’s gratifying to be part of the collective leadership to move the mission forward and reach our Kentucky Can goal.”

Zusman agreed, “I think that living in a college town is such a benefit — in so many ways — diversity, arts, sports, opportunities for continuing education, etc. Because of this, I always thought it was important to support those colleges that give so much to the community.’

Through the Kaufmann and Zusman Fund, the couple’s gift will celebrate and honor the work of Everett McCorvey, director of UK Opera Theatre; John Nardolillo, director UK Symphony Orchestra; and Jefferson Johnson, director of UK Choirs. Funding will be used to not only impact their work and current students, but also future generations of students and the Lexington community and beyond.

“Our goal at UK Opera Theatre is to be the best training program for young artists in the country. This gift helps us to recruit, develop and retain some of the best young artists in the country through scholarships, support and preparation for the future,” McCorvey said. “Along with our talented artists, the Lexington audiences will be the beneficiaries of this transformational gift because they will get to experience some of the best young talent in the world right here on our stages in Lexington at the University of Kentucky!”

The Kaufmann and Zusman gift will support performance, outreach initiatives and programming for UK Opera Theatre, UK Symphony Orchestra and UK choral ensembles, to build access to and appreciation for music and ensure that it will thrive in the Bluegrass region. The fund’s priority will be student scholarships.

“Ben Kaufmann and Janet Zusman are amazing partners in our mission to change the lives of our students. Their gift will have an immediate, profound and long-lasting impact on their lives, as well as on generations of students to come,” said Nardolillo, whose students have already benefited from the couple’s generosity on such programs as the Prague Summer Nights Music Festival.

The fund will also be used to recruit and retain top-ranked faculty that demonstrate excellence and promise and other opportunities for students participating in the opera, orchestra and choral programs.

This support is a game-changer for UK and the arts, says Dean Mark Shanda of UK College of Fine Arts.

“When the artistry of our opera, choral, and symphony students aligns with the passion of a member of our audience, great things can happen. The music fund, established with a gift of more than $6.6 million dollars, provides critical support so that music performance and audience enjoyment can be linked for generations to come. Their belief in our teaching, creative activity, and service mission; their trust in our outstanding faculty cohort, McCorvey, Johnson and Nardolillo; and their affirmation of the impact we have on our students and the Lexington community; greatly affirm the arts' essential role to the lives of individuals and the community. We are forever grateful for their philanthropic leadership.”

UK School of Music Director Stan Pelkey agrees. “Ben and Janet have been supporters of the School of Music and its ensembles for quite some time, and we deeply appreciate their past generosity. But a gift of this scope is transformative. The UK School of Music’s national and international reputation among prospective students has been on the rise during the past decade. This gift will elevate our ensemble experiences even further, reinforce our reputation as a leading school of music, and strengthen our ability to recruit and support exceptional cohorts of undergraduate and graduate students from across Kentucky and around the world.”

Kaufmann’s gift-giving continues a long tradition of philanthropy and public service carried out by both sides of Kaufmann’s family. His mother, Sara C. Kaufmann, was a member of the Combs family which has a long-standing tradition of service to UK, as well as the Commonwealth, through such key figures as T.T. Jones, a former dean of men at UK; Earl Combs, a former New York Yankee, and her brother, Gov. Bert Combs, Kentucky’s 50th governor. Kaufmann’s parents, Sara and Dr. Maurice Kaufmann, in turn served the community. As a doctor, Maurice was recognized for his work with patients and his allergy health care practice. In addition, Sara took the lead in funding the first building for Hospice of the Bluegrass.

“I learned generosity and giving from them,” said Kaufmann, whose knowledge as a professional financial planner enabled him to be creative with the assets he has gifted. “I’ve always been taught to give. And giving via an educational institution is a way of making our world better.”

With Kaufmann and Zusman’s gift, UK College of Fine has now reached and surpassed the college’s $20 million mark as part of UK’s historic $2.1 billion Kentucky Can campaign goal.