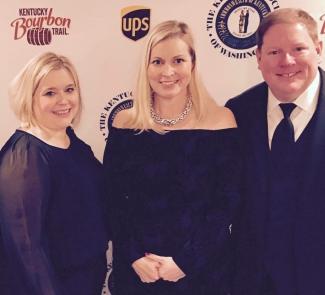 Shiela Corley, Shannon Corley and Brad Osborne attended the Bluegrass Ball in Washington, D.C. Both Corleys were active in the UK Alumni Association and communicated their love of UK and Kentucky to anyone they met.

She was one of those people who could light up a room. Alumna Shannon Corley had passion for everything she did. Whether it was playing basketball in high school through three different surgeries or converting her family, friends and co-workers to University of Kentucky Wildcat fans, her excitement was contagious.

“Every place she went, she touched someone’s life,” said Shiela Corley, Shannon’s sister. “She had the ability to inspire others and became a mentor and friend to everyone she met. She believed in you before you believed in yourself.”

Now, Shannon’s legacy will live on through The Corley Family Endowed Scholarship in memory of Shannon Corley. Shiela and her mother, Anna, created the scholarship shortly after Shannon died in December 2017, and her family, friends, classmates and coworkers quickly grew the fund.

It will benefit a freshman from Muhlenberg County who attends the University of Kentucky, both Shannon and Shiela’s alma mater. The recipient must possess Shannon’s traits, including passion, drive, eagerness to lend a helping hand and a willingness to go the extra mile.

“Shannon always wanted to be the giver and never wanted to receive,” Anna said. “That is why it meant so much to us that so many people contributed to her scholarship. People from more than 25 states gave. It shows you that she had an impact across the country.”

Though the first scholarship will be awarded in fall 2019, the fund already is already helping UK. It is advancing UK’s $2.1 billion campaign. Kentucky Can: The 21st Century Campaign aims to improve opportunities for students, advance healthcare and further innovative research by growing the university’s endowment, but it also seeks to better connect alumni to UK.

Her leadership created a positive environment for alumni to gather and connect and helped grow membership in the Nation’s Capital Chapter, said Jill Smith, associate executive director and chief operating officer for the UK Alumni Association.

“Through my work at the UK Alumni Association, I’ve had the pleasure of meeting some special alumni throughout the years,” Smith said. “Shannon Corley is one of those special people I will always remember. It was clear that Shannon loved her alma mater and did whatever she could to further spread the good news happening at UK.”

A proud native of Muhlenberg County, Shannon never forgot where she came from, Anna said. She loved introducing people to “the great state of Kentucky” and exciting them about UK. On campus, Shannon was an active member of several organizations, including Alpha Xi Delta. She served on the UK Student Fellows Board, participated in the Student Development Council, sat on the Homecoming Court and was the Panhellenic Rush Chair.

She also knew UK’s impact on the Commonwealth, including its ability to transform communities like her small western Kentucky county. Nearby, in Bowling Green, UK opened a regional College of Medicine campus this year. It will produce more doctors to serve the area and allow UK to train more physicians familiar with the specific needs of the region.

The Corleys saw the University of Kentucky as the University for Kentucky, said Chad Massie, a Lexington native and friend of the sisters. They helped people understand what makes Kentucky such a unique and special place and how people’s support of UK would enhance the state.

“Shannon was a wonderful person, Kentuckian, friend and university ambassador,” Massie said. “She was the embodiment of the vision that the university and (President Eli) Capilouto deliver to the Commonwealth – a girl from a small Kentucky community can use her UK education in combination with her amazing spirit to propel herself to success on a national level. Now, her legacy will continue, and she will give students from her hometown the same opportunities she was given.”