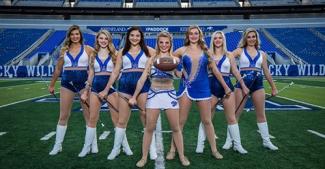 More than 50 years ago, 150 ladies would vie for the 10 open Sweetheart Majorette and two Feature Twirler spots at the University of Kentucky. Tryouts were competitive, and only the best twirlers would be chosen.

The Sweetheart Majorette Alumni Club launched a crowdfunding initiative in October to raise $10,000 toward an endowed $50,000 scholarship. When the two-week campaign closed on Nov. 1, the group had raised more than $15,000 from 60 gifts. Donors gave in honor of their wives, mothers, sisters, daughters and granddaughters.

“Being a baton twirler takes agility and athleticism, and many SEC schools offer twirlers scholarships,” Closson said. “If we want to rebuild our line to the original 10 and attract more of the best twirlers in the country, we need to step up and offer scholarship support.”

Before launching the crowdfunding initiative, the alumni group had already raised $11,000. With the added $15,000, they are more than halfway to an endowed scholarship.

Once endowed, the alumni club hopes to award each majorette/feature twirler a scholarship, said Kelly Queen Priebe, a 1986 Sweetheart Majorette alumna and the chair of recruiting for the alumni club. That way, no one is left out.

“Crowdfunding was a way to get our voice out to the public and let them know how they could help to make this scholarship a reality,” Priebe said. “It has been a true group effort. We worked as a team to share the crowdfunding campaign and get the word out about our scholarship. As a result, we were able to reach family, friends and fans throughout the country.”

The Sweetheart Majorettes are still accepting donations for their scholarship. To give, visit https://bit.ly/34Sj7BW.

All donations to the Sweetheart Majorette/Features Endowed Scholarship Fund benefit Kentucky Can: The 21st Century Campaign. A comprehensive campaign focused on increasing opportunities for student success, funding innovative research, improving health care, strengthening our alumni network, and supporting our athletic programs, Kentucky Can is more than halfway to its $2.1 billion goal.

The Sweetheart Majorette Alumni Club campaign was part of Big Blue Crowdfunding, a platform designed to help university organizations, programs and units raise funds and generate interest in innovative projects. Anyone on campus can apply to have their project featured on Big Blue Crowdfunding. To learn more, contact Annual Giving at annualgiving@uky.edu.