A Tribute to Myra Tobin 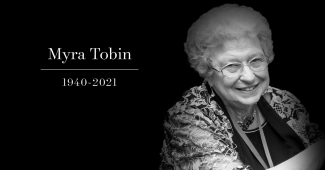 “We don’t know what it’s like to live in a world without Myra.” This is a stark reality that so many people are feeling at this moment. Some might say our community is weaker today with the loss of an alumna who spent much of her life committed to the University of Kentucky. And they’d be right. But in reality, the institution is stronger because of the legacy “Miss UK,” Myra Tobin leaves behind. Myra experienced many moments like this, celebrating the lives of dear friends and colleagues who passed on. In fact, in my last conversation with Myra, she shared with me about the life and contributions of another person the community of greater Hardinsburg recently lost.

Now the tables have turned. It’s Myra’s life that it is time to recognize and celebrate. As someone who was an accomplished professional from small town Kentucky, we know the barriers she broke professionally in the big city of New York and globetrotting throughout the world. Then, she returned home…literally. Home to the University of Kentucky and home to Harned, Kentucky, where she grew up.

Like so many of us, I was honored to spend quality time with Myra, precious quality time. You never knew where Myra might show up, but if it involved the University of Kentucky, she’d be somewhere within reach. In many ways, UK was her oxygen. Not even an ice storm in Dallas, Texas kept her away from athletics…and she was the last to accept the pandemic closed the SEC men’s basketball tournament… Myra was on her way. A couple of years ago I walked into the lobby of a hotel in Kansas City during the men’s basketball NCAA tournament semifinals. It wasn’t the same hotel most UK fans were staying in. But while checking in, there was Myra, within reach. For the rest of the weekend, we traveled to the games together; and watched other tournament teams play from the hotel restaurant. During that time there was a couple from Texas who we also chatted with. The last day I was checking out and the gentleman from Texas commented to me, “That woman sure does make your university look exceptional.”

Myra loved the University of Kentucky. She had a passion for the engagement opportunities and served so many vital facets of the institution including the Board of Trustees and the Alumni Association Board. Myra’s mind seldom rested. She was always in the moment at hand and planning her next excursion simultaneously.

I had the privilege of getting to know Myra over the past five years. This is a very short time compared to many who were in her life for decades. But it doesn’t take long to know who she was; a very kind woman who cared deeply about everyone around her; always attentive with gentle eye contact, and a good conversationalist. She was wise and probably rarely stumbled under pressure. I think she had a great sense of humor accompanied by nuggets of sage advice if one listened closely. And no matter how well someone thought they knew her, she never failed to show a corner of her mind that had not yet been revealed. Lastly, she was a keeper… not just in terms of material things but friends… once a friend of Myra’s, she kept you.

The road between Harned and Lexington is long and winding. I had the privilege to travel it with Myra last month. Ten miles from her home is where one of her farms sits. “Turn left by that water tower, Brent,” she said. We proceeded to ride along a gravel road with beautiful farmland on both sides. She enjoyed describing it, telling me the beauty in all seasons. She repurchased the land her parents once owned. Myra knew her roots and took great joy returning to them. It’s the Kentucky way. We see it every day among our alumni population. Truly special. I’ll treasure that day forever. Driving back to Lexington that evening I couldn’t help but think of the thousands of trips she made.Neither that road nor a University of Kentucky event will lose the natural anticipation of Myra’s presence.

In her final days, Myra continued to do what she loved, visit campus and enjoy her home in Harned until she returned to Lexington and rested for the final time, peacefully, on the grounds of her alma mater.