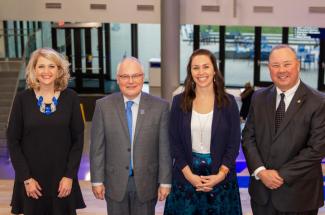 A mentor. A friend. A Wildcat.

That is how one nominator described Jill Smith, the interim executive director for the University of Kentucky Alumni Association, who was among the four winners of the Terry B. Mobley Philanthropy Awards Nov. 20.

Presented in the Gatton Student Center, the awards, named for UK’s first vice president for development, Terry B. Mobley, recognize UK employees who have demonstrated excellence in fundraising and alumni relations, through their professional achievement, advocacy in the community or service to UK.

Each recipient receives a commemorative julep cup, a stipend and recognition on the wall of award winners in the Sturgill Philanthropy Building.

“We continue to set records thanks to the contributions of today’s award winners,” said Mike Richey, vice president of philanthropy and alumni engagement. “For the second consecutive year, we have raised more than $200 million, and we are more than halfway to the $2.1 billion goal of Kentucky Can: The 21st Century Campaign. These individuals are helping us develop the relationships, implement the programs and lay the groundwork that will advance the university and help us better serve the Commonwealth and beyond.”

Smith, who joined the UK Alumni Association in 2006, won the Professional Achievement Award for her service to the UK Alumni Association. In her 13 years, she has initiated new programs, including the Royalty Reunion and Pioneer Project. She champions diversity and engagement, and her knowledge of UK history is unparalleled, according to her nomination.

“Through her commitment to the overall mission of the university, she has set a tone for collaboration across campus while setting an example of high performance,” her nominator said. “She shows true leadership, counsel and guidance, and her life is defined by a loyal commitment to love and serve others.”

Fellow winner Katie Sanders, associate director of annual giving, also was recognized for her leadership. Last year, UK established the Student Philanthropy Board and planned the opening of the Center for Student Philanthropy, a first of its kind resource center for students educating them about and encouraging them to participate in philanthropy.

“Katie did an excellent job promoting and celebrating the center as one of the first of its kind,” her nominator wrote. “More importantly, she empowered the members of the Student Philanthropy Board and her interns. The students were already so accomplished and philanthropic before joining the organization, but she taught them how to hone and focus that passion to make a greater impact.”

Sanders received the Rising Achievement Award for her excellent work performance and success as well as her potential for future outstanding achievement. Her work was supported by colleagues like Mark Pearson, IT tech support and recipient of the Front Line Award. In addition to providing hardware, software and network support, he is essential in the broadcast email process, ensuring UK Philanthropy and the Alumni Association effectively communicate with their constituents.

Pearson goes beyond his daily duties to produce videos and engaging PowerPoint presentations, to take beautiful photographs and to lend a hand wherever he is needed.

“He is the definition of a team player and is always striving to achieve more in all that he does,” one nominator said. “He is a creative problem solver and is continually learning and developing best practices that not only benefit our organization today, but will have a positive impact on the future.”

Another nominator described Pearson as helpful and thorough, someone who is always willing to fix a problem and to give 110 percent.

“When working an event with Mark, he often arrives even before I do,” the nominator wrote. “He thinks about anything I may need and has it just in case. His bag is similar to Mary Poppins’. Not only does he always have the exact adapter, clicker or cord that I need, but he usually has a spare of each.”

Stuart E. Brown II accepted the Philanthropy Service Award, a special recognition presented to people who are strong advocates for philanthropy. As a veterinarian at the Hagyard Equine Medical Institute, he specializes in reproductive medicine and consults on cases nationally and internationally. He also chairs the Gluck Equine Research Foundation.

Well-known in the horse and thoroughbred industry, he has many connections that have helped grow the UK Ag Equine Programs and advance the center’s philanthropic efforts. He has been key in closing several equine-related gifts, advancing the mission of the UK College of Agriculture, Food and Environment.

“It is truly a pleasure to work with Dr. Brown,” his nominator wrote. “His focus, drive and passion for UK are an inspiration to everyone around him. He is involved on all levels of administration at UK and is frequently asked to consult and weigh in on equine initiatives. His time and talent have been essential to the growth and success of the Gluck Center and UK Ag Equine Programs.”

The Mobley Awards program began in 2005 to honor Mobley’s long advancement career at UK. A former basketball player who played under Adolph Rupp, Mobley returned to his alma mater in 1977 and used his connections to grow the university’s fundraising from $3 million annually to about $61 million. The awards program has honored more than 50 individuals since its inception.