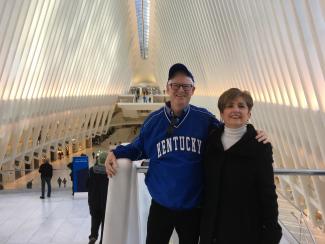 Most choose to attend college to earn an education —hoping they will gain knowledge to prepare them for the pursuit of a career. But the path to a degree can unlock more than job opportunities.

It was fall of 1961, and the University of Kentucky freshman was eager to embark on his six-year plan — a fast-track strategy that would allow him to earn both a bachelor’s degree and a law degree by the age of 24.

By nature, I’m a very social person,” he said. “To go from a small elementary school and high school to a major university was like putting a kid in a candy shop.”

Gorman referred to himself as a “bright-eyed kid,” but he was prepared to persevere and leave the university as a well-rounded young man.

I wanted to change the world.”

fast forward three years — “the plan” was going according to plan.

Then tragedy struck, which affected the rest of my life.”

Gorman idolized his first cousin, and the two were often inseparable. “I didn’t make any decisions without clearing them with Bill,” he recalled. “We had our lives planned out and ultimately would have practiced law together.”

With undying admiration and great sorrow, Gorman refers to his cousin using past tense. In November of 1964, Bill was killed while serving in Southeast Asia.

The plan Gorman spent years constructing seemed to crumble in a matter of minutes. “I was emotionally devastated,” he said. “My whole outlook on life changed.”

Determined to honor his late cousin’s wishes, Gorman returned to the classroom.

A year earlier, Gorman had graduated with a Bachelor of Arts in Political Science. Now, he was well on his way to earning a Juris Doctorate from the College of Law

On the evening of the UK vs Vanderbilt game, Gorman took a break from his studies. He recalls being nervous as he rang the doorbell of the Alpha Delta Pi sorority house. Gorman wasn’t particularly fond of blind dates, but this one turned out to be life-changing.

“We had a great evening. I married Vicki two years later, and we’ve been together for 52 years,” he continued. “She is the best thing that has ever happened to me — my best friend.”

In the Spring of 1967, Gorman left campus with two degrees and the “love of his life.”

The Gorman’s attribute their personal and professional success, in large part, to the university.

Vicki graduated from the UK College of Nursing and became head nurse in the ICU/CCU at Jewish Hospital. Later, she was named director of the private duty section of Caretenders. Upon retiring, the company continued to support Vicki’s charitable ways by adding to various gifts.

Additionally, Vicki serves on the Deans Advisory Board for UK Nursing, and she remains active in Women & Philanthropy.

She has boundless energy and has always found time for charitable giving. I have never known a person who does so many nice things for people, in addition to faithfully supporting me in any venture,” Chris said. “Your income takes a real hit when you pursue politics. It was only because of Vicki’s support and professional success – gained through her degree – that I was able to follow my dream.”

From 1992-1996, Chris served as Kentucky’s 46th attorney general. In that role, he marked historic accomplishments in the areas of protecting abused children, women and senior citizens. In association with the federal government, Chris participated in BOPTROT – the largest criminal indictment of legislators in Kentucky history.

Currently, Chris is a partner with the Louisville law firm of Conliffe, Sandmann and Sullivan, where he concentrates his practice in the area  of complex corporate litigation.

“I was privileged to work with a talented staff,” he said. “Together, we made a huge difference in the lives of children. And that’s really what life’s about, isn’t it?”

Today, the Gorman’s continue to make an impact.

As a Christmas gift in December of 2009, the couple started a $5,000 scholarship in Vicki’s name. The funds would be used to support a deserving nursing student. “After meeting with a number of students – and realizing their need and desire to pursue a high-quality education – we were hooked.”

“The College of Nursing has been fortunate to have such wonderful supporters in Vicki and Chris Gorman. Their spirit and generosity are unmatched, and our students have greatly benefitted,” Dr. Janie Heath, dean of the College of Nursing, said. “In this Year of the Nurse and Nurse Midwife, we appreciate their support now more than ever. Their gift will help us provide the personal protective equipment and other supplies to make the return to school even safer for our nursing students.”

Over the years, the Gorman’s continued to renew – and even add – to their scholarships. Today, their gifts fund student success in the UK Rosenberg College of Law and the Department of Political Science in the College of Arts and Sciences.

“Chris Gorman’s accomplishments as an alumnus are extraordinary. His term as attorney general of Kentucky left a legacy of impact for generations,” Mary Davis, interim dean in the Roseberg College of Law, said. “Further, the Gormans’ generosity continues to impact the future of legal education. They were early contributors toward the now completed construction of a law building to provide a 21st century legal education. Recently, they were eager to create a scholarship fund for future law students.”

“Chris and Vicki have made an immeasurable impact on our department. Their gifts have allowed our pre-law students to pursue internships and research experiences that would have been out of reach without their support,” Clayton Thyne, professor and chair in the Department of Political Science, added. “Chris is also an invaluable member of our alumni board – he brings experience, energy and mentorship to our department and its students. We couldn’t hope for a better friend to the department.”

In the wake of the COVID-19 pandemic – not unlike many investors – the Gorman’s took a hit in the stock market. As a result, the couple contemplated ways to cut back on spending.

“However, the more I thought about it, that’s exactly the reason I shouldn’t cut my donations to UK students,” Chris said. “You don’t have to be super rich to give in a meaningful way to UK. Once you meet UK students, I believe many will be convinced to pay it forward and help them achieve their dreams.”

With the help of UK, the Gorman’s were able to achieve their dreams. Even though their generosity allows students to pursue their passion and purpose – the couple says, what they give pales in comparison to what they get.

“If I die tomorrow – without a doubt – among the best money Vicki and I have spent is what we have given to complete strangers through our UK scholarships. We have received much more from the students than we have given to them.”