Asher Uses His Story to Give Back, Inspire Others 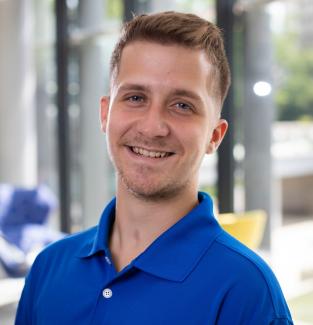 Cameron Asher thinks he is smarter now than he was ever meant to be. Over the last four years, he has pushed and challenged himself, never cutting himself a break. He had something to prove to himself and to his doctors.

In his senior year of high school, the Manchester, Kentucky, native was in a severe car crash where he suffered a traumatic brain injury and shattered his skull. He was airlifted to the University of Kentucky Albert B. Chandler Hospital and spent time in a coma. Once he woke up, he wore a helmet to help his skull heal and eventually had his skull fused back together. He completed rehabilitation at Cardinal Hill Rehabilitation Hospital and worked with an at-home tutor to finish his high school curriculum.

“I had a great teacher who recognized that I was ambitious and pushed me and helped me grow,” the senior business management major said. “I was trying to balance surgery and regaining my memory, but she would not let me quit.”

Still, his physicians recommended that he not immediately go to college. It was too risky to his healing.

“I had been emailing Don Witt (then-associate provost for enrollment management), and once I was out of the hospital, he invited me to dinner at the Hillary Boone Center,” Asher said. “I was still wearing my helmet and was unsure if I was going to begin school in August. I had been offered a full scholarship, and Don told me at dinner that UK would hold my scholarship. In that moment, I was overcome with the feeling that I would be fine and that I should not let fear stop me from achieving my dreams. His compassion helped me realize that I would be OK.”

Asher planned to major in pre-medicine with the hopes of becoming a neurosurgeon. But ultimately, he realized he was more passionate about being in an administrative setting to help others achieve their goals. Initially, he did not want to rely on the Disability Resource Center, because he wanted to challenge himself. He did not want special treatment.

“That ended up being a mistake,” Asher said. “I made everything harder on myself instead of recognizing that I needed help. I had difficulty retaining the material I read. I had difficulty concentrating, so I would read the same material over and over. Once I accepted help from the DRC, I was able to have a low distraction environment to take my tests, additional time on my exams, the use of a whiteboard to write down my thoughts and a break during exams so that I can give my brain a rest.”

Asher still had to work harder than his peers. He devoted his life to studying and attending class. He did not leave much time for outside activities or organizations. But, his scholarship and the generosity of his donors afforded him that luxury. Without the scholarship, he may not have been able to attend UK or to focus so intently on his studies. Scholarships and funding student success is a key goal of the university's comprehensive campaign, Kentucky Can: The 21st Century Campaign. Donors like Asher's are bringing UK closer to its $2.1 billion goal and transforming students' lives.

“My scholarships allowed me to study constantly and helped me get through that first year when it would have been so easy to quit,” Asher said. “I had so many people around me who were encouraging me and supporting me. I never felt like I was just a number at UK. I knew that people cared about me and wanted me to succeed.”

Though it was difficult, Asher said constantly pushing himself helped him expand his intellectual capacity. It gave him a hunger to learn more. After graduation, he plans to pursue a dual master’s in business administration and public health.

“I have no doubt that my existence is nothing short of a miracle, and I wanted to use the rest of my life to make a difference,” Asher said. “I met the first responders who saved me, the doctors and nurses who cared for me and the neurosurgeon who knew I wanted to pursue neurosurgery in college and gave me a book encouraging me. I began attending church and using social media to tell my story and to inspire and motivate others who are facing obstacles in their lives.”

Now, he wants to go into health care philanthropy and community leadership so that he can make connections and rally investors to help him start a hospital in his hometown, serving Eastern Kentucky residents.  This year, he joined the Student Philanthropy Board and serves as an Alumni Ambassador, which are helping him develop leadership skills and networking skills that will help him in his future profession.

“I want to use my story to uplift others and create something bigger and more long-lasting,” Asher said.  “Eastern Kentucky needs a hospital, and I want to be a part of making that change. That is why I am combining business management and community leadership at UK. I want to not only raise money; I want to raise people’s spirits. I want to be like Don Witt, take people under my wing, encourage them and help them realize their potential.

“I want to seize every opportunity to grow personally and to help the Eastern Kentucky economy grow,” Asher said. “I feel it was a privilege to come to UK and to do it debt-free, and I want to use everything I have learned here to give back to the people who have given so much to me.”