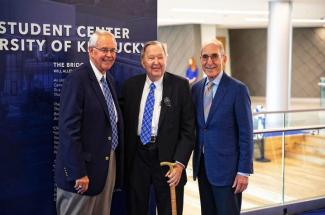 A historic $5 million gift from the University of Kentucky’s largest single donor will help thousands of young Kentuckians from underserved areas obtain a degree from UK.

The scholarship program will also target students from medically underserved areas who want to attend medical school at UK.

The scholarship program will also prioritize and support first-generation students across these three areas.

The UK Board of Trustees will vote to accept the gift at its Feb. 17-18 meeting.

Gatton has set a standard for philanthropy for more than 25 years. The college of business and economics at UK bears his name as does the university’s student center. He has provided the foundational gifts for both the Gatton College facility and the Gatton Student Center. But his philanthropy for UK — and needs across his native Kentucky — extend far and wide. The total impact of his gifts at UK now total more than $70 million.

“Mr. Gatton deeply understands that our mission is to advance Kentucky in everything that we do — the education we provide, the research we conduct and the care and service we render,” President Eli Capilouto said. “He believes in that mission. And he believes that it is Kentucky’s children — this generation of young people and those who will follow — who will secure a future for a state that is healthier, wealthier and wiser.”

Mike Richey, who recently retired as UK’s vice president for Philanthropy and Alumni Engagement, continues to work closely with Gatton and his foundation.

“Bill Gatton appreciates what education meant for him and for his family. He has a particularly deep understanding of the importance that the University of Kentucky’s university has for the future of the Commonwealth,” Richey said. “He has spent a lifetime giving back and paying it forward, knowing that the seeds he plants today will yield a much brighter tomorrow for our state.”

Details of the scholarship program include:

Turner said UK’s mission to advance Kentucky depends on ensuring more young people from the state have access to the distinctive education the university provides. Addressing unmet financial need is one of the key strategies UK is employing to meet the needs of Kentucky’s workforce.

Thus far, more than 600 UK LEADS awards have been given to students, with the average award being more than $5,700.

“Kentucky’s future depends on an engaged, skilled and nimble workforce. This gift and how it will be utilized will help power our work to reach a graduation rate of 70% — a figure that would place UK among the top institutions in the country,” Turner said. “Most important, though, because of Mr. Gatton’s continued generosity, more bright and promising young Kentuckians — who otherwise wouldn’t have this opportunity — will have the chance to realize their potential. Kentucky and its future will be the beneficiary for generations to come.”

The University of Kentucky is increasingly the first choice for students, faculty and staff to pursue their passions and their professional goals. In the last two years, Forbes has named UK among the best employers for diversity, and INSIGHT into Diversity recognized us as a Diversity Champion four years running. UK is ranked among the top 30 campuses in the nation for LGBTQ* inclusion and safety. UK has been judged a “Great College to Work for" three years in a row, and UK is among only 22 universities in the country on Forbes' list of "America's Best Employers."  We are ranked among the top 10 percent of public institutions for research expenditures — a tangible symbol of our breadth and depth as a university focused on discovery that changes lives and communities. And our patients know and appreciate the fact that UK HealthCare has been named the state’s top hospital for five straight years. Accolades and honors are great. But they are more important for what they represent: the idea that creating a community of belonging and commitment to excellence is how we honor our mission to be not simply the University of Kentucky, but the University for Kentucky.