Taking Flight: Feliciano Knew He Was Destined to Work for NASA 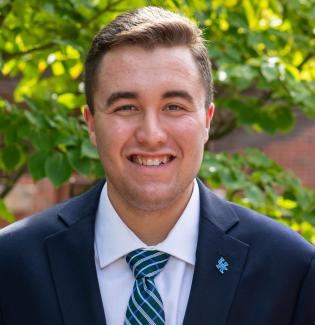 As he approaches graduation, senior Joseph Feliciano has a plan. The physics and mathematics major intends to earn a master’s in science in space systems engineering from Morehead State University.

The Elizabethtown, Kentucky, native is already closer to his dream. Last summer, he spent 20 weeks interning for NASA at Marshall Space Flight Center in Huntsville, Alabama. He collected data from satellites and helped create code that he would then send to NASA engineers to help create better spacecraft and account for environmental and interplanetary space factors that may affect the spacecraft.

“Working there was a dream,” Feliciano said. “NASA internships are so elite. It is like getting into the Super Bowl. Only one out of 2,000 applicants are accepted, and I am so thankful to everyone who helped me get there.”

As a first-generation student, he considers himself somewhat of a pioneer. He pushes himself to achieve and is continually impressed with his accomplishments.

His parents instilled in him self discipline, determination and a good work ethic. Both veterans of the U.S. Army, they scrimped and saved to provide him opportunities and as a result, he was able to attend his dream school.

But he said his donors were who enabled him to focus on his education. As a scholarship student, he did not need to work and was able to immerse himself in his studies, join outside organizations and make connections that allowed him to further his education and build leadership skills. Scholarships and funding student success is a key goal of the university's comprehensive campaign, Kentucky Can: The 21st Century Campaign. Donors like Feliciano's are bringing UK closer to its $2.1 billion goal and transforming students' lives.

“I never had to worry about student debt or wonder if I had enough money to pay my tuition, room, board or books,” Feliciano said. “I am so thankful for that. I was determined to go to college and my family and I have always put education first. Whatever I needed to do to better myself and further my education, we did. But, having scholarship support made the journey a little easier and provided me opportunities I never would have had without these scholarships.”

Feliciano attributes his acceptance to the NASA internship program in part to his parents’ support. They always taught him to believe in himself and to challenge himself to achieve more.

“My mom has a will of iron,” Feliciano said. “She taught me to never let any obstacles stand in my way to and to always be prepared to embrace any opportunity that came my way.”

He also credits his “just try it” attitude. He did not know anyone at NASA or anyone with a connection to NASA, but he had faith in his skills. He knew that his University of Kentucky education provided him a solid foundation in physics, mathematics and computer science. It also taught him valuable problem solving and critical thinking skills that he knew would be essential at NASA.

Then, he just went for it.

“I knew I wanted to get practical experience before I graduated, and I knew I eventually wanted to work at NASA, so I figured I would at least apply,” Feliciano said. “The only thing they could say was no. Now, I have been a part of a project where they may publish the results. Whether my name is included, I can say that I assisted in getting the data and contributed to solidifying our footprint in space exploration.”

Feliciano has always been interested in space exploration. He serves as a NASA ambassador and tells people about the organization’s goals: go to the moon by 2024, have a moon presence by 2028 and explore Mars by the mid 2030s.

He enjoyed getting to learn the NASA culture, learn from engineers, experience Alabama and work at NASA during the 50th anniversary of the Apollo moon landing.

“Coming to UK led me on a path that I cannot even believe I am on,” Feliciano said. “Though the journey is still ongoing, I am confident I will eventually work at NASA, and I am so thankful for the connections and friendships I have made and the guidance that I have received that have led me to this place.”