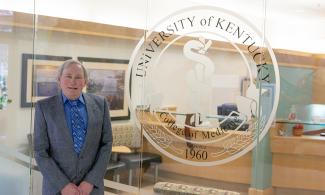 Ed Shuttleworth's story shows the power of a University of Kentucky education. He used his College of Medicine training to practice as a surgeon in rural Western Kentucky, establishing a surgery center to better serve the region. Now, he is inspiring a new generation of doctors and surgeons.

A childhood injury, and how it was treated by his local doctor, set Shuttleworth on his path toward a career as a surgeon in his own small town — a career he loved for more than 30 years.

“It’s been a dream of mine since I was 7 years old,” Shuttleworth said of his career in medicine. “You know how some people just know what they want to do from the get-go? I just knew that’s what I was going to do. I’d cut something when I was 5 or 6. My mother saw it and said ‘You know what that means?’ I said ‘Yeah,’ and we went to the doctor. He had to give me a shot and sew it up.

“And he did it in such a kind and friendly way, smiling at me the whole time," Shuttleworth said. "And he gave me a fresh apple when I left. I just never forgot that. I thought, ‘Man, this is really neat.’”

Shuttleworth, who was the surgeon at Muhlenberg Community Hospital in Greenville, started his college career in 1965 at Henderson Community College. After getting undergraduate degree from UK in 1969, he applied to several medical schools and was accepted to all of them.

“But this is where I was, and I liked it so much here. I liked how they taught. So I stayed at UK for medical school,” Shuttleworth said.

After graduating from the UK College of Medicine in 1973, Shuttleworth did a year of internship in surgery. But he put his residency on hold and joined the U.S. Army near the end of the Vietnam War in 1974.

“There’s a tradition in our family where some Shuttleworth has fought in a war since the Spanish-American War. It was my turn, so I volunteered after my internship. I wound up in Germany. My orders were cut, and I didn’t go to Vietnam,” he said. “I would have given my eyeteeth to go because the operations they were doing over there were incredible.”

After his tour in the military was up in 1977, Shuttleworth returned to UK and finished his 4 1/2 years of residency. The big city life in Lexington never really appealed to him, so he decided to head back to western Kentucky to Muhlenberg County to practice medicine.

“I grew up in a small town (Cairo in Henderson County). Everybody knew everybody. For me, it was fun. You didn’t have to lock your doors,” he said. “And when I came to Lexington, it was like going to New York or Paris or London, all in one. It was huge. I just couldn’t get feeling comfortable enough in that atmosphere.”

In 2000, Shuttleworth built the Muhlenberg Surgery Center and says this shows he did not have to set up his practice in Louisville or Lexington to be successful.

“A lot of doctors want to stay around the area they did their residency. But I knew because of me being from western Kentucky, we needed physicians in rural areas,” he says. “There was no question. And almost unheard of were rural community surgeons.”

“From the day I got there until the day I retired, I felt the people actually needed me. It was a good feeling. I don’t know how to describe it, but I thought this must be what God wants me to do,” said Shuttleworth, who worked with another UK surgeon at the hospital, Dr. Aubrey (Louis) Armstrong ’69 AS, ’73 MED. “We were doing stuff when I got there no one had ever seen before. Once we got the right equipment, we just took off. People got operated on, I got lucky enough and God blessed me with patients having good enough results they kept coming back to me.”

Of course being a small-town doctor meant he was never off the clock, which suited Shuttleworth just fine.

“I’d go into the hardware store and see someone who always had a question or wanted to show me something. I did a whole bunch of free consults,” he said. “I’d see someone on the street and before you know they would be talking to me…I was totally dedicated. There’s something in me that whenever the phone rang, I answered. If there was someone in the ER, I’d go see them no matter the time of day or night. Luckily, my wife didn’t kill me and didn’t divorce me. She understood.”

However, he still leaned on his UK professors for guidance in the beginning.

“Sometimes I’d be in the middle of a surgery, and I would get in a situation where I didn’t know what to do. So I would get on my phone, call and talk to my professors and say, ‘This is Shuttleworth again. I may be in trouble here.’ It wasn’t a call to say hello,” he said. “The first four or five years, I’d call frequently and use access to my excellent surgical professors and get free consultation.”

It was Dr. Griffen who finally gave him some “tough love.”

The last call he made, he talked to Griffen. After explaining the situation, all Shuttleworth got was an ‘And?’ on the other end of the line from his mentor. Griffen told him to lean on his learning to solve the problem, which he did.

“So after we talked it through he told me, ‘By the way, don’t call here anymore, you know what to do. But if you need us, we’re here,’” Shuttleworth said.

Shuttleworth was a first-generation college student, coming from a small town and with no money.

His message to students who want to become doctors or follow any career path is to not let your circumstances dictate what you become. Also, don’t be fearful.

“I think if someone has the desire and if they’re mentally agile enough to do college material, there’s nothing wrong with going ahead and doing it,” he says.

Shuttleworth hopes his legacy is that of a doctor who put his patients above anything else.

“Someone who took care of people and was a caring physician,” he said. “Dr. Griffen was one of the most moral humans that I knew. I learned so much from him that wasn’t surgery. It was how I’ve tried to live my life.”

This story originally appeared June 19, 2019 on the News from the Blue blog.