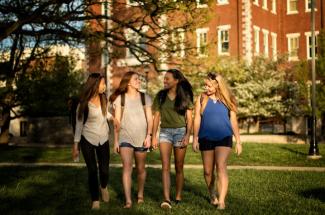 The University of Kentucky is celebrating a record year — the largest graduating class in history, record retention rates and the highest one-year giving totals. For the second year in a row, UK has raised more than $200 million, bringing it closer to its $2.1 billion campaign goal.

Last year, the university announced Kentucky Can: The 21st Century Campaign, a multi-year comprehensive philanthropy campaign focused on increasing opportunities for student success, funding innovative research, improving health care, strengthening the alumni network, and supporting athletic programs. During the 2018-2019 fiscal year, UK received $212.1 million in gifts and commitments from 45,145 donors, all of which counted toward the Kentucky Can campaign.

“We started Kentucky Can with an ambitious goal — raising $2.1 billion for UK’s colleges, programs, outreach and health care — because we knew that these investments are vital to UK’s future success,” said Mike Richey, vice president for philanthropy and alumni engagement. “We are grateful for the continued support of our community and look forward to even greater fundraising totals next year.”

“These numbers don’t just happen. They are a reflection of the work of hundreds of people across our campus and, of course, the donors, whose commitment to this place makes such philanthropy possible,” said UK President Eli Capilouto. "Front-line philanthropy officers, gift officers, deans, administrative staff and so many others are coming together around the idea that Kentucky Can. As important, what the numbers also reflect is the impact of this campaign. We are raising $2.1 billion not simply because we can, but because we must for our campus and the Commonwealth we serve.

"As a result of this campaign, thousands of students, we hope, will be able to attend UK no longer burdened by financial need. And we will continue to build and enhance facilities where faculty, staff and students work together to learn from each other and to solve the biggest challenges confronting our state and world. We will continue to show the world what is possible and what Kentucky can do.”

For the last several years, UK’s fundraising totals have steadily risen. Major gifts backing capital projects like the Lewis Honors College and Bill Gatton Student Center helped increase the totals and transform campus. In 2019, UK received significant support for scholarships, including a $10 million gift to UK LEADS, a scholarship program supporting talented students who have $5,000 or more in unmet need — the balance a student owes after all financial aid, scholarship support, family contribution and private loans are applied.

The LEADS scholarship was vital for Liridon Hasani, a sophomore psychology major who was diagnosed with cancer this year. Worried about paying for school and his health, Hasani worried that his grades would suffer, preventing him from getting into the medical school of his choice.

“Thanks to this scholarship, I am proud to say that my grades were the highest they have been since I started my college career,” Hasani said. “This opportunity gave me the drive to succeed, and it relieved my parents. I know how desperately they want me to receive a college education, even if they cannot finance it personally, and this scholarship made it possible for me to continue this year.”

UK also welcomed gifts furthering its outreach, including gifts to support equine safety, both in drug testing and improvements to racetrack surface safety, and a gift to enhance the distillation, wine and brewing studies program, all of which will train leaders and workers for two of Kentucky’s signature industries.

“As the University for Kentucky, we are dedicated to improving and serving the Commonwealth,” Richey said. “It starts with education. Through our innovative programs, groundbreaking research, UK HealthCare and Extension Service, we are tackling problems that impact residents throughout the state and affect communities worldwide. We are empowering students to be leaders in their industries and their hometowns, so that we all have a brighter future. Our donors are the reason all of these efforts are possible.”

A chief goal of Kentucky Can is to increase alumni giving by 21% and encourage them to invest in their alma mater. In April, UK hosted its first giving day, raising more than $1 million in 24 hours from 3,262 gifts. More than 450 first-time donors contributed to the day, and nearly 600 faculty and staff gave, all bringing UK closer to reaching its goals.

Also, in April, UK was selected as one of four sites nationally to lead a comprehensive, four-year study of the opioid epidemic in 16 Kentucky counties with the goal of reducing opioid deaths. The $87 million National Institutes of Health grant will help UK leverage future private gifts for its nationally recognized research program and UK HealthCare.

Looking ahead, UK expects another exciting year. It will open a new regional College of Medicine campus in Northern Kentucky, welcoming 35 new students; its Grain and Forage Center of Excellence in Western Kentucky, providing research and support to help farmers yield larger, more sustainable crops; and the newly constructed College of Law, all of which have been supported by private donors.