Senior Michael Graehler Making An Impact in Nepal with His Nonprofit 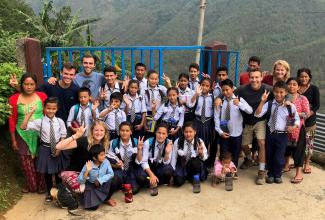 As a founding member of the University of Kentucky Student Philanthropy Board, senior Michael Graehler has helped set the tone for philanthropy around campus and hopes to make an impact on how students view philanthropy.

"Through the board, I want to let students know you don't have to have a million dollars to be a part of philanthropy," Graehler said. "You can do it through all sorts of ways like service work, helping the homeless, loving your neighbors, anything really."
Not only is Graehler preparing to graduate from UK next month, but he is also focusing on running his own nonprofit called Developing Nepal.

Developing Nepal started in August after Graehler and a team of UK students went on a service trip to Nepal. While on their trip, Graehler and the other students visited a children's home for abused and abandoned children in Talamarang, a small village in central Nepal. They quickly learned that the children's home needed to expand to house boys and girls separately.

After returning from the trip, Graehler and his team wanted to do something to help raise money for the children's home in Nepal so they could purchase another tract of land and begin the expansion.

Graehler’s friend and founding member of Developing Nepal, Lauren Guilfoil, said they had the idea to start selling bracelets they had purchased in Kathmandu, the capital of Nepal, to help raise money.

"The passion the people have working there for the kids and the amount of effort they put in really drove us to start something back home," Guilfoil said. "We saw an urgent need and just jumped in to help them."

The bracelets known as Little Angels Bracelets were sold primarily through social media and to friends and family. After seeing the bracelet sales really take off combined with the support they were getting from the Lexington community, Graehler and his team decided to start Developing Nepal.

Since starting the nonprofit, Graehler and his team have raised more than $16,000 toward their $20,000 goal for the children's home in Nepal.

"Seeing people supporting our nonprofit has been amazing, and the outpouring of support we have gotten from all over the country and even in Australia," Graehler said.

After graduation, Graehler is going back to visit the children's home in Nepal over Christmas and he hopes to make another trip next spring with Guilfoil and his team.

"We will definitely continue to work throughout Nepal, whether that be in Talamarang or elsewhere throughout the country," Graehler said. "Our goal with the nonprofit is to help enhance Nepal's economic state because it is such a beautiful, but underdeveloped country with amazing and caring people."