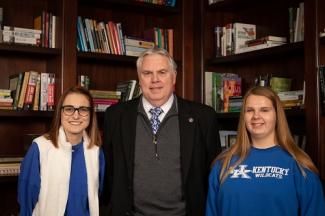 Like many Wildcats, Gary Moore always dreamed of attending the University of Kentucky. He grew up a fan of the basketball team, hiding his radio under his pillow so he could listen to late-night games. He considered UK the best state school, and he knew he would need to stay in state to afford his education.

As a first generation college student, Moore and his family had limited opportunities for higher education. Living in Butler County, a south central Kentucky county adjacent to Bowling Green, Western Kentucky University seemed like his best option. He could commute to school every day and save money.

As a young boy, inspired by President John F. Kennedy’s challenge to land on the moon and return back safely, Moore wanted to study engineering. Since he was a freshman in high school, he had envisioned becoming a civil engineer. But, Moore’s plan hit a snag. WKU did not have an engineering program at the time. As an engineer, he knew he could combine his math and science skills with community service, improve the quality of life in a community and protect the environment through his designs and efforts.

When Moore was accepted to attend UK, he was ecstatic. UK was his dream school, and to be able to walk in the footsteps of other great scholars was overwhelming. The experience changed his life, allowing him to not only follow his career dreams, but to meet and play pickup basketball games with the team he loved.

Now, he wants to give students from his hometown the same opportunities he had. In 2011, he created the Moore-Meredith Scholarship, which honors his parents, Milton and Ollie Moore, who always encouraged Moore to continue his education and to strive for a better life for himself and for his community. Giving back and supporting one's community was a familial value they instilled in him at an early age.

Moore worked with UK Philanthropy and the Office of Academic Scholarships to create a scholarship that rewarded Butler County students who were heavily involved in their communities and had a track record of volunteerism. He originally wanted to specify that students pursue a career in engineering but knew that would limit the number of students he could benefit. He wanted to have the maximum impact on students in his home county.

“I want to make these students’ lives better and give them an opportunity to follow their dreams like I was given,” Moore said. “Hopefully, some of them will return to Butler County, so they can help spark economic development and improve the area.”

This year, he created the Gary T. Moore Academic Scholarship that will also benefit Butler County students, particularly sophomores, juniors and seniors pursuing science, technology, engineering or mathematics degrees in the colleges of Engineering or Agriculture, Food and Environment. While both funds are non-endowed scholarships that he supports annually, they will later be converted to endowed funds, allowing his scholarships to support Butler County students in perpetuity.

“I don’t go back to Butler County as often as I would like – though I go back several times a year – but I feel like this is a way I can make a contribution,” Moore said. “It also is a way to give back to the engineering profession to prepare the next generation to continue the advances that have been made through civil engineering.”

Moore met two of his Moore-Meredith Scholarship recipients in early November. Many years, Moore visits Butler County High School to speak about engineering to his high school. He participates in Career Day and encourages students to consider UK. This year, he also visited UK, where he met with the College of Engineering and ate lunch with senior Haley Adkins and freshman Breanna Whittinghill.

A materials engineering major, Adkins already has a jump on her career. She works for Parker Hannifin, an engineering company that provides products for industrial and aerospace clients. Adkins works in the O-ring division, creating rubber gaskets. She hopes to work for the company full time once she graduates, preferably in the company’s Cleveland, Ohio, headquarters.

“I got a letter in the mail saying I received a scholarship for Butler County students, and at that time, I was the only person from my graduating class to come to UK,” Adkins said. “I knew I wanted to study polymers, so my options were chemical engineering and materials engineering. UK is the only school in the state that offers material engineering, so UK was the pretty obvious choice. But without scholarships like Mr. Moore’s I could not have attended UK. I would have had to drop out, move back home and not been able to study materials engineering.”

The youngest in her family by 16 years, Whittinghill knew she wanted to step out of her comfort zone. Moving across the state to Lexington allowed her to assert her independence and pursue her passion of chemistry. She is studying biochemistry and psychology with the hope of becoming a forensic scientist for the FBI, but she hopes to be placed in Kentucky.

“I fell in love with campus when I first saw it, so I knew I wanted to come to UK,” Whittinghill said. “But the financial situation was the number one factor for me when I was choosing schools. When I received the scholarship, it eased my mind.”

More students would probably pursue a degree at UK if they had support like Moore’s scholarship, Whittinghill said. UK seems daunting, because it is big and far away, but scholarships like Moore’s entice students to attend.

“Butler County is a really small county, and we do not have many students come here, and we have a really small alumni base,” Whittinghill said. “The fact that he is supporting people from home is really cool. I am so appreciative of his support.”

Butler County was a great place to grow up, Moore said. However, as an engineering major, he did not have many options in Butler County once he graduated from UK in December 1979. In January 1980, he began working for Booker Associates in St. Louis, Missouri, developing sanitation, storm water and floodplain systems. He then was recruited by the St. Louis Metropolitan Sewer District in Missouri, where he worked for 32 years.

“I never expected to leave Kentucky, but UK prepared me for the job market,” Moore said. “My college education taught me to manage my time, be organized, set goals and work hard to always be the best. It gave me a skillset that allowed me to compete with the best people in engineering. That emboldened me and allowed me to grow in my career.”

“You never know what doors will be opened for you,” Moore said. “I have always tried to mentor and grow young engineers, and working as a professor is one more way that I can help young people be successful.”

Moore also has connected with his scholarship recipients. Many of them are the children of people he went to high school with. Therefore, when he is back in Butler County, he tries to eat lunch with his current recipient and their parents. He follows their career and applauds their successes.

“I am so overwhelmed and thankful to have an impact on these students’ lives and to have a chance to honor my family,” Moore said. “It makes me so proud. One of my recipients is friends with me on Facebook, and she has done everything she said she would do in her scholarship essay. She got her master’s, began working for the health department and has begun giving back to the community.

“Being a country boy from Butler County, I never thought my life would turn out the way it has, but I have had an amazing life,” Moore said. “I am so blessed to have had this success and to be able to give back in the way that I have.”