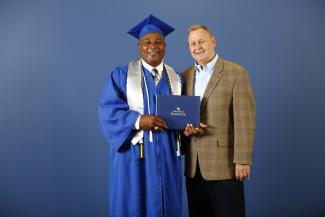 This article shows how the University of Kentucky cares for the total student-athlete, providing them the support and resources to be successful in competition and in life. Strengthening support of UK's student-athletes and Athletics program is a priority of the university's $2.1 billion comprehensive campaign, Kentucky Can: The 21st Century Campaign.

Oliver White has led a full life, but earning a college degree has always been on his mind.

A standout career as a tight end for the Kentucky football team led the Pittsburgh Steelers to pick him in the 10th round of the 1985 NFL Draft, but his career lasted only one season. Soon after, he moved to back to Kentucky and got married. He began life after football as a coach before making a good living in manufacturing as a supervisor and plant manager, all to support his family. Just as had happened when his focus was primarily on football while he was at UK, that degree never quite happened.

Then he watched his sons walk across the stage and earn college degrees of their own. Inspired, White came back to Kentucky. He wasn’t on his own either.

Bob Bradley – the UK associate athletics director for student services who retired in 2018 – never throws away a file on a student-athlete, nor should he. Bradley helped the late C.M. Newton launch the Post-Eligibility Program in 1989, which pays for tuition and books for any UK student-athlete who returns to school – no matter whether it’s three years or three decades after they complete their eligibility. Prior to White’s return, more than 150 former Wildcats have returned and graduated, including Jodie Meeks and Randall Cobb.

White, after sitting down with Bradley, learned he would need to change his major since recreation no longer existed as a degree. Bradley suggested community leadership and development, which fit well with White’s goal to work with a non-profit organization or at UK. While he completed his coursework, White got a jumpstart on that, volunteering in UK’s Center for Academic and Tutorial Services and helping mentor young men and women.

In May 2018, White’s patience and hard work paid off. Thirty-four years after he played his final game as a Wildcat, White walked across the stage at commencement and received his diploma from the University of Kentucky.

"When you're young, you don't think ahead,” White said. “I tell these guys, 'Finish your degree while you're there because sooner or later you're not going to be able to play ball.' For me, getting a degree means everything."

White’s story is just one example of an athletics department singularly committed to positioning its student-athletes for a lifetime of achievement. It’s no wonder former Wildcats throughout the country are enjoying successful careers as doctors, dentists, lawyers, entrepreneurs, teachers, coaches and, in rare cases, professional athletes.