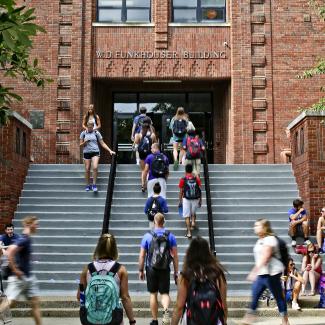 Before she applied for college, sophomore Kate Harding took the ACT and SAT five times. She knew that having impeccable grades and high standardized test scores were the only way she could afford college. A native of Rochester Hills, Michgan, Harding is studying pre-pharmacy. She chose the University of Kentucky because of its pre-pharmacy and pharmacy programs, but realized that an out-of-state school came with a higher price.

“In the next five years, my three siblings and I will be in college,” Harding says. “I knew that my parents could not pay for all of us, so I would be responsible for paying for college. When I heard that I received the Dorothy H. and Richard R. Crutcher Family Scholarship, it was such a relief. That was $5,000 that I did not have to worry about.”

Every year, nearly 5,000 students enter UK, many of whom have some level of unmet need. Unmet need is the cost of attendance — tuition, room, board and books — a student is responsible for paying after all scholarships, grants, federal loans, other financial assistance and their expected family contribution as determined by the federal government through the FASFA are applied. Sometimes, the student receives help from a parent or outside scholarship, but often the student must take out private loans to cover the unmet need.

An internal study of UK’s students found that regardless of academic performance, students who have $5,000 or more per year in unmet need are less likely to return the following year, says Todd Brann, director of analytics and assessment, academic excellence.

In 2016, the university piloted Leveraging Economic Affordability for Developing Success (LEADS), a program designed to reduce students’ excessive unmet need. UK built a predictive model, looking at students’ academic, demographic and financial information and gave grants to students with at least $5,000 in unmet need, Brann says. They were essentially targeting students for whom finances were their only barrier to success.

In the first year, UK used institutional funds to give 178 students a one-time grant, as well as financial counseling services, and these students’ one-year retention rate went from a predicted 57.7 percent without LEADS support to 75.8 percent, Brann says.

“The results validated our model and is helping the university reach its goal of achieving a 90 percent retention rate by 2020,” Brann says. “It also lowered our students’ average unmet need by 12 percent, the lowest rate since 2013.”

For Harding, scholarship support was the deciding factor in her college choice. It allowed her to focus on her studies, earning a 4.0 grade point average her freshman year while participating in the Pre-Pharmacy Club, Kappa Delta and her college’s living learning community. She works part time as a pharmacy technician and conducts research under Vincent Venditto, an assistant professor of pharmacy.

And she is not alone. Students like Harding are counting on scholarship support to help them launch their careers and gain the education and experience to make a difference.

“They have been brought up in a culture where they thought that if they worked hard, they would earn a scholarship,” says Sandy Copher, director for academic scholarships. “Academic scholarships are a recognition of their effort and an important part of attracting top students to the university.”

Because UK has limited scholarship funds, the university is increasingly reliant on private donors to grow student support and to ensure the vitality of UK’s academic, creative, research and outreach programs.

Donors like C. Richard Smith understand the importance of establishing student scholarships. A first-generation high school graduate, Smith always wanted to attend college, but he could not afford the tuition. In 1998, he created the C. Richard and Terri P. Smith Scholarship Fund for students from Eastern Kentucky so some students would not be prevented from following their dreams because of their families’ financial situation.

“I wanted to give first-generation Eastern Kentucky students the opportunity to go to school,” Smith says. “Next to getting my own first-generation students into college, this scholarship is my proudest accomplishment. It is heartwarming to see how appreciative these students are and what a positive influence this scholarship has been on their lives. Many of them tell me that someday they would like to start a similar scholarship so that they can give back to their community.

“By creating an endowed scholarship, I know that the scholarship will continue long after I am gone, helping more students to graduate through my scholarship,” Smith says. “But one of my greatest joys is that it has potentially spawned giving from the recipients so that even more students will have the opportunity to obtain a college education.”

“With about 5,000 new students enrolling each year and only 95 donor-funded need-based scholarships, receiving a scholarship is kind of like winning the lottery,” Brooks says.

However, students have more opportunities to receive scholarship support from the colleges and programs.

Throughout the year, students call Brooks desperate for extra funds. Last year, he had a student who needed $1,400 to stay in school. UK Student Account Services put her on a payment plan so that she could slowly pay off the $1,400 over the semester. Shortly before school started, one of Brooks’ scholarship recipients took a semester off, freeing $1,000.

“Then, she was only responsible for paying $400, which is much more doable,” Brooks says. “Any amount of student need is important to us, because it could mean the difference between students staying or dropping out.”

Even small amounts of support can make a big difference to students, Copher says. Every year, she receives letters and calls from grateful scholarship recipients. One student recently thanked her donor for providing the money for “the everyday essentials,” including books, housing and food. While students may have all or a portion of their tuition covered through a combination of loans, scholarships and grants, they cannot afford to simply survive during the school year.

“Nationally, the cost of education is rising, and most students have some type of need,” Copher says. “The more we can help students, the more we can provide greater access to education. Donor-funded scholarships help us expand access to a larger group of students and allow those students to have a better college experience. They can work fewer hours, which provides more time to study, to conduct research with their professors, to participate in campus organizations or to enroll in an internship. All these opportunities can help develop leadership skills and provide career-related experiences.”

Scholarships also allow students to immerse themselves in their studies and in the Lexington community. J. Marshall Shelley IV graduated in May 2018 with a degree in kinesiology and started his doctorate of physical therapy at UK in August. By receiving a scholarship, he was able to acclimate to campus his first two years and improve his study skills.

Learning how to balance his school and life commitments better prepared Shelley for graduate school and enabled him to work in a clinic as a physical therapy technician so he could confirm that he wanted to pursue that field.

“Having a scholarship was so awesome because it showed me that I could make something of myself and help people through my profession,” Shelley says. “I was able to earn good grades, gain helpful experience and it also allowed my family to become financially stable. My parents were not out a penny for my undergraduate education, so they were able to save and can now help me with graduate school.”

“I never could have gone to UK without a scholarship,” Bright says. “It was a life-changing scholarship because it allowed me to come to Lexington, where I met so many different people and had different experiences. I grew as a person and in my profession, and I was able to bring everything I learned back to my hometown, where I can now influence the next generation of students.”

This story originally ran in the fall 2018 issue of Kentucky Alumni magazine.