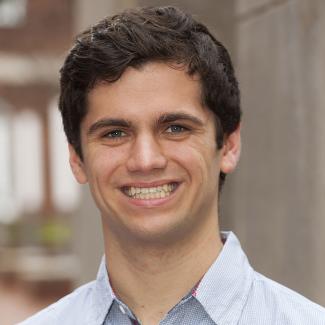 As he sells coffee, shakes and fries, junior Jordan Nicoulin cannot help but run through his finances in his head. Working two nights a week at Sonic Drive-In and every Saturday at a coffee shop will give the Lexington father enough money to pay for his 3-year-old son’s weekly care with a little left for groceries.

But working three days while attending the University of Kentucky does not give the 21-year-old much time to fund his own tuition. As a mechanical engineering major and math minor, he knew that he would likely have to spend 5 years in school, preparing for his dream job at Hitachi Automotive Systems Americas Inc.

But Nicoulin is trying to condense his program to 4 years by taking 18 credit hours a semester. He is projected to graduate in May 2019 and plans to intern this summer at Hitachi.

“I graduate in May, and that fall, my son starts school,” Nicoulin says. “I knew I wanted to be out of school by the time he started so that I could focus on his schooling and on building a better future for us. I didn’t want to be paying loans for the next 20 or 30 years, when I could be saving for his education and for my retirement.”

Nicoulin is the perfect example of an endowment at work, says Eric N. Monday, UK’s executive vice president for finance and administration. Nicoulin’s tuition is fully paid by the T.W. Lewis Endowed Scholarship and William T. and Edith H. Harmon Endowed Scholarship, allowing him to focus on his studies and family.

Monday says the UK endowment is a collection of donated funds that work together to generate income for the university. To ensure the long-term viability of the endowment, the university only spends the earnings from each fund. The principal gift is never spent. It is invested to maximize the income it generates.

Since its inception, it has provided opportunities for students, programs and faculty, funding 94 faculty chairs, 216 professorships and countless scholarships. Most of the endowed funds are designated, meaning they have a specific purpose. Donors may create a scholarship, fund research, and further the arts at UK or support health care, athletics or Extension programs. The possibilities are endless, but the funds are not, says Monday.

Currently, the endowment is about $1.4 billion, making UK part of an elite group. Only 15 other public universities in the country have an endowment of more than $1 billion, but for an enterprise like UK, that fund is still too small, Monday says. Only 1.3 percent of the university’s budget comes from its endowment, which is not enough to help the university achieve its strategic plan. Also, most of the institution’s scholarships are not endowed, but funded through the university’s annual budget.

UK’s goal is to grow its endowment to $2 billion, which could generate an additional $24 million annually to be used in support of the university’s strategic initiatives, Monday says. For example, $24 million could fully fund over 100 Principal Investigator (PI) researchers’ salaries and benefits, which is enough to completely fill Research Building 2 and a future Research Building 3. Those PIs could bring in another $100 million in external research dollars to fund cutting-edge research and create new knowledge.

“Funding should not be a limitation, particularly for students who come from more challenged households where there is a higher amount of unmet financial need,” Monday says. “The endowment also gives us an opportunity to attack some of those challenges. By increasing the endowment, we have a great opportunity to diminish roadblocks for our students.”

For example, this year, UK reported the highest fall-to-spring retention ratio in decades. The figure tracks the percentage of first-year students who completed their first semester and continued for a second semester. Provost David W. Blackwell announced in March that 93.7 percent of first-year students from the fall returned in the spring.

“UK has always had generous donors, people who get great fulfillment from giving and improving UK,” Monday says. The university was founded with donor support and has continued to progress thanks to private gifts.

Growing the endowment is especially important right now, according to Monday. In the last 10 years, state funding for UK has decreased by more than $70 million. Growth in the endowment is critical for the university to fund scholarships, programs, and the recruitment and retention of exceptional faculty — ideally — for the life of the university.

But ensuring the endowment’s longevity and continued growth requires planning, Monday says. The investment committee has a measured, diversified investment approach, which largely shelters it from a turbulent market, making UK a good investment.

The challenge with having mostly designated funds in the endowment is that it limits UK’s ability to grow, says Monday. As a result, it can’t be as responsive to institutional needs, including offering more student scholarships or hiring more faculty and researchers in a growing area.

“We always want to be better and to do more,” Monday says. “Greatness is graduating 6,000 students, being greater is graduating 7,000, 8,000, 10,000 students a year. Endowment earnings allow people to make a greater difference forever.”

Jordan Nicoulin is grateful his scholarship donors invested in him because it allowed him to have a richer collegiate experience. He is active in the Lewis Honors College, joined the Scholars in Engineering and Management Program and is getting ready to study in Costa Rica this spring. He learned the value of community service from Tom Lewis, when he spoke at the dedication of the Lewis Honors College, and is eager to make a difference wherever he goes.

“I could probably have still gone to UK without scholarships, but it would have been a lot harder,” Nicoulin says. “A lady in my class works 40 hours a week to pay for her schooling, and she is taking 20 credit hours so she can get out faster. I almost felt guilty that I had a full-tuition scholarship, but I know lots of people who have been helped by scholarships. Scholarships give students a chance they wouldn’t have had otherwise. I appreciate all my donors have done for my son and me.”

This story originally appeared in the summer 2018 issue of Kentucky Alumni magazine.