Brack Duncan Wants to Change Lives Through His Nonprofit 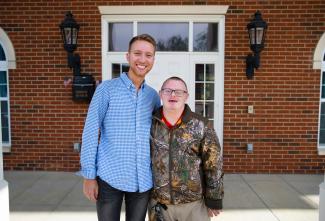 "For me growing up, my parents always stressed the importance of giving back," said Brack Duncan, a University of Kentucky senior majoring in social studies in secondary education with a minor in political science.

A member of the Student Philanthropy Board, Duncan hopes to change student's perspectives about what philanthropy and service actually mean.

"Through the Student Philanthropy Board, I want to show students what they can do and that just because you're a student does not mean you can't change as many lives as someone like Bill Gates," Duncan said.

Since starting at UK, Duncan has done quite a bit of his own philanthropic efforts in the past year. He is one of the founders of the non-profit organization Buddies of the Bluegrass, a nonprofit corporation that partners with student organizations to coordinate events, like concerts, that raise money to fund special needs adoptions for Kentucky families.

Duncan started Buddies of the Bluegrass shortly after he competed in Kentucky's Got Talent, a philanthropy event organized by the Delta Delta Delta sorority, in April with his best friend Josh, who has Down Syndrome.

"So many parents of kids with special needs messaged me after seeing the video and told me that I have no idea how much this video meant to them and thanked me for showing that just because someone is labeled as special needs, doesn't mean they won't be able to do what others can," Duncan said.

The two buddies met when Duncan started working for STRIDE, a Winchester, Kentucky-based nonprofit that provides therapeutic recreation to individuals aged 16 and older who have a learning or developmental disability. At first, Duncan would spend a few hours every Friday with Josh, and they would take road trips together to Lexington or just go for a car ride and listen to music.

"Josh started to open up more and more as we kept hanging out and I opened up more too," Duncan said. "We really started to bond during car trips and road trips to Lexington and that is when things changed from a job to a friendship."

Duncan has a huge passion for adoption since four of his siblings were adopted through foster care. He hopes to continue to raise awareness for adoption and foster care, especially for local special needs adoptions in Kentucky.

For this rest of his time at UK, Duncan hopes to do even more philanthropic work for Buddies of the Bluegrass and even other nonprofits. His ultimate goal is to do more for others and help change lives.

"I always said I wanted to change the world," Duncan said. "Now I have really started to change my perspective from changing the world to changing someone else's world."

For more information on Brack Duncan and Josh, read their story on UK NOW.