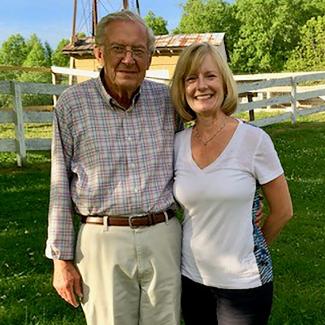 Leaving the only home he had ever known was difficult for Kenneth Blair. He grew up in Letcher County in Eastern Kentucky, where he met his wife, raised his family and worked as an electrician in the coal mines.

But in the 1960s, his beloved county began to experience turmoil. In the mines, there was conflict that Kenneth felt could get dangerous. Reluctantly, he moved his family to Lexington and started anew.

As a result, Kenneth found a new path. He began teaching aspiring electricians at a Fayette County vocational school, earned his education degree at Eastern Kentucky University, rose through the ranks to become a principal and assistant superintendent and put his two daughters through the University of Kentucky.

“My father is a humble and quiet guy who never wants thing,” said Beverly Tharp, Kenneth’s daughter. “Instead of buying him another tie, I figured the best way to honor him would be to set up an education scholarship in his honor. He was brave enough to leave the mountain and to create a whole new life for himself, and I knew he would want to give back to the county he loved.”

In 2001, Beverly created the Kenneth Blair Endowed Scholarship. It supports students from Letcher or surrounding counties that have financial need and encourages them to follow their dreams.

“When I told him about the scholarship, he was speechless,” Beverly said. “He couldn’t even begin to process that he now had a scholarship in his name. As an educator, he always wanted the best for his students and told them never to settle for anything less. He taught them how to have a good career and to support their families.”

“I know that it cannot pay for their whole tuition, but when combined with other scholarships, it gives students a nice financial aid package,” Beverly said.

Beverly first created the scholarship when she worked at Procter & Gamble in Cincinnati. As director of finance and later director of innovation deployment, she attended many career fairs, seeking the best potential employees.

“I met hundreds of thousands of students, and many of them talked about the struggles they faced in college,” Beverly said. “Many had financial challenges, and when I started thinking about the scholarship, I felt it would be a way to help those students, honor my father and show my appreciation for UK.”

Giving back was second nature to Beverly, who grew up in a generous household. Her father and mother were involved in their church, and her mother, Anna Lou, was always visiting homebound church members, bringing them flowers or providing them company.

“My mother is one of the most caring, nurturing people you will meet,” Beverly said. “She does a lot of little daily things that mean so much to the people she helps. My parents would help anyone in need, but they are able to give more in service. My husband and I have less time to give, but we were able to give back financially.”

It also helped that Procter & Gamble was a matching employer, who doubled the value of Beverly’s gift. It allowed her to grow her scholarship fund every year, affording more Eastern Kentucky students the opportunity to attend UK.

“UK is a beacon of light for many people in the state,” Beverly said. “It provides a huge service to the state and inspires students from areas where many people do not have college degrees. But, it also presents a challenge to students.

“Every year, when UK sends us the list of students who received the scholarship and their majors, my dad gets teary eyed,” Beverly said. “He knows how hard it can be for these students. Coming from the mountain to the city can be a big adjustment.”