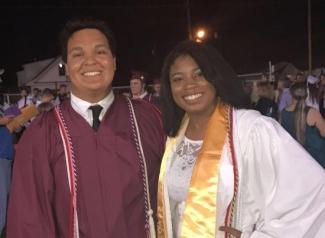 Alan Cabrera poses with a friend after graduating Harrison County High School. Now a UK sophomore, Cabrera juggles school, work and family commitments with the help of an anonymous donor.

Every morning, Alan Cabrera starts his day around 7 a.m. The child of newly divorced parents, Cabrera wants to help his mother as much as possible, which includes dropping his three siblings off at Harrison County Middle School and St. Edwards School. By loading his siblings into his Toyota Camry, Cabrera is saving his mother time and money, because her large SUV drinks gas.

Then, the University of Kentucky sophomore heads to campus, where he begins classes around 9:30 a.m. or 10 a.m. and studies until 4:30 p.m. or 5 p.m., when he begins his shift at American Eagle in the Fayette Mall.

“It is a lot, but I try to give myself three days each week to study and do my homework,” Cabrera said. “I do not want to have to rely on my parents for schooling. I want to be able to say I have my life under control, so they do not have to worry about me.”

This year, a local family is helping Cabrera accomplish that goal. An anonymous donor gave UK $1 million towards its LEADS scholarship program. LEADS – Leveraging Economic Affordability for Developing Success – is a scholarship program designed to help the neediest students.

In 2016, UK noticed that students who had more than $5,000 in unmet need were less likely to return to campus in the fall, regardless of their academic performance, said Todd Brann, director of analytics and assessment, academic excellence at UK. Unmet need is the remaining balance on a student’s account after all federal and school assistance is applied, scholarships are awarded and the student pays the recommended family contribution as determined by the FAFSA. LEADS reduces students’ unmet need to $5,000 or less – often eliminating the students’ balance.

“We were essentially targeting students for whom finances were their only barrier to success,” Brann said.

“The results validated our model and is helping the university reach its goal of achieving a 90 percent retention rate by 2020,” Brann said. “It also lowered our students’ average unmet need by 12 percent, the lowest rate since 2013.”

Students are chosen for the program using a variety of criteria, including their unmet need level, their academic success, whether they are first-generation college students and if they are living off campus, Brann said.

In 2018-19, five Harrison County natives benefited from LEADS scholarships. Among them was Cabrera, who is studying chemistry and finance. He is on a pre-medicine track and hopes to eventually become an obstetrician/gynecologist, but he is minoring in finance to have a back-up plan.

Through Harrison County High School, Cabrera enrolled in dual credit courses at Spencerian College his senior year, taking classes in math, college success and budgeting. He learned how to balance his finances, which gave him an advantage coming into UK.

“It taught me how I should manage my money and budget for large expenses,” Cabrera said. “That really helped me this year, because I know how to use the money I have to pay for school expenses.

“But this scholarship really helped,” Cabrera said. “It was a stress reliever for me and my family at a time when we needed it most, and it is reassuring to me. It is nice to know that people have taken notice of me and want to support my education.”

More than 85 percent of UK students require some form of financial aid each year, according to the UK Office of Student Financial Aid and Scholarships. About 24 percent of UK students receive the Pell Grant, and an average undergraduate student borrows $22,750 over the course of their college career. Most students, including freshman Whitley Lemons, who received the Harrison County LEADS scholarship plan to take out loans for their unmet need.

Lemons enrolled in UK to become an agriculture journalist. At Harrison County High School, she studied under Savannah Robin, a FFA teacher and UK alumna who now works as UK’s internship coordinator for the Equine Science and Management Program. Robin sparked Lemons’ interest in community and leadership development, telling her how she could use her UK education to become a policy advocate for Harrison County farmers and families. Now, Lemons wants to work at Farm Bureau or a similar organization, informing the public about agricultural policy by writing stories about who the legislation affects.

More than most students, Lemons knows the price of student debt. Her mother returned to college in her late 30s and graduated to become a middle school language arts teacher. Though she is still paying off her loans, she is helping Lemons to finance her education.

“My family is not setting the world on fire financially, and the cost of a college education hit us hard and fast when I started at UK,” Lemons said. “We had to cut back a lot to make it work, but receiving this scholarship has made my whole year. It erases our worries, and it allows students like me to become future leaders who will grow society and support their communities.”

LEADS also helps UK achieve its strategic plan goals, including increasing the university’s retention rate and six-year graduation rate. UK also made LEADS a priority in its new $2.1 billion comprehensive campaign – Kentucky Can: The 21st Century Campaign. Launched in September, the campaign aims to increase the university’s scholarship endowment by $300 million and to award 2,100 LEADS scholarships each year.

“Your commitment tonight and in the days, months and years ahead will forever alter the trajectory of our Commonwealth and of our greatest treasure and hope – our students,” said UK President Eli Capilouto on Sept. 14 and the campaign kickoff event.

For all five Harrison County students, the LEADS scholarship was a welcome surprise. It came at a particularly crucial time for Ben VanHook, a freshman studying agriculture economics. He wants to learn how to make farms more efficient and profitable, and he planned to work all summer making money to pay for his college expenses. Then, in June, he had an accident while raking hay. It required surgery, physical therapy, skin and wound care and rest.

With his savings depleted, VanHook relied more heavily on grants and scholarships to finance his first year at UK, but said none of his financial aid compared to the Harrison County scholarship.

“I was blown away when I saw it, because it was such a relief,” VanHook said. “It reduced my stress and limited the number of loans I had to take out. It has helped me enjoy my time at UK and focus on my studies.

“College gets more expensive every year, and people like this donor make college more affordable for students like me,” VanHook said. “I can’t thank them enough.”