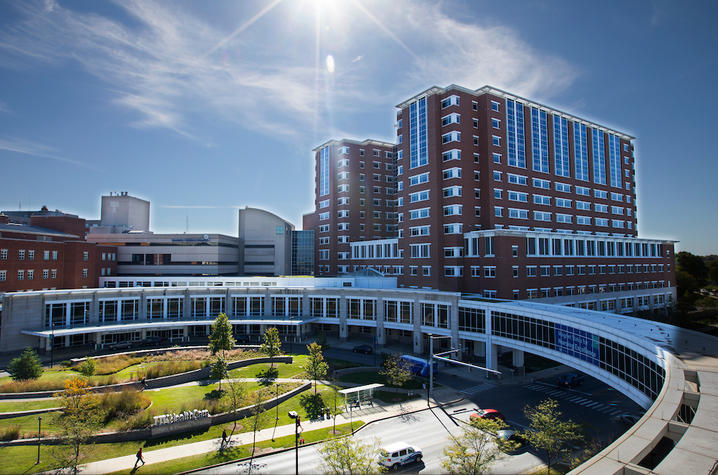 This article shows the importance of supporting UK HealthCare so it can solve complex health problems plaguing Kentuckians. UK HealthCare is nationally ranked for its research, community outreach and clinical care. Advancing UK HealthCare is an initiative of the University of Kentucky's $2.1 billion comprehensive campaign, Kentucky Can: The 21st Century Campaign.

For the fifth consecutive year, the University of Kentucky Albert B. Chandler Hospital at UK HealthCare has been named the No. 1 hospital in Kentucky and the Bluegrass Region by the 2020-2021 Best Hospitals rankings and ratings from U.S. News & World Report.

For the fourth straight year, the University of Kentucky Markey Cancer Center has earned a top 50 national ranking for cancer care, this year climbing to No. 29.

“This has been a challenging year, to put it mildly. But in these times, it’s more important than ever that Kentuckians with complex health problems have a medical center they can come to for best treatment options possible,” said Dr. Mark F. Newman, UK executive vice president for health affairs. “To have received this honor now for the fifth consecutive year shows that not only is UK HealthCare the best in Kentucky, we are the best for Kentucky.”

While the UK Markey Cancer Center has been designated as “high performing” for many years prior to cracking the top 50, this year’s ranking of No. 29 in cancer care is the highest to date. In addition to its recognitions from U.S. News & World Report, Markey has been a National Cancer Institute-designated cancer center since 2013, the only one in Kentucky and one of just 71 in the country.

“With Kentucky still holding the unfortunate ranking of being No. 1 in overall cancer incidence and mortality, nowhere in the country is it more important for patients to have access to the best possible cancer care,” said Dr. Mark Evers, director of the UK Markey Cancer Center. “But we at Markey seeing positive changes on that front. We are treating and saving more patients than ever before. This latest ranking is further evidence of how we are making progress toward our goal of conquering cancer in the Commonwealth.”

The annual Best Hospitals rankings and ratings, now in their 31st year, are designed to assist patients and their doctors in making informed decisions about where to receive care for challenging health conditions or for common elective procedures.

“At UK HealthCare, we stand ready to help with any medical situation or illness, regardless of its complexity,” said Colleen H. Swartz, vice president for operations at UK HealthCare. “If you live in Kentucky, there is a good chance you or a loved one will need UK HealthCare at some point in time, whether it’s for cancer treatment, trauma, premature babies or any number of medical problems. We take that responsibility very seriously.”

For the 2020-21 rankings and ratings, U.S. News evaluated more than 4,500 medical centers nationwide in 16 specialties, 10 procedures and conditions. In the 16 specialty areas, 134 hospitals were ranked in at least one specialty. In rankings by state and metro area, U.S. News recognized best regional hospitals based on high performing rankings across multiple areas of care.

The U.S. News Best Hospitals methodologies in most areas of care are based largely on objective measures such as risk-adjusted survival and discharge-to-home rates, volume, and quality of nursing, among other care-related indicators.

This story originally appeared in UKNOW on July 28, 2020 and was written by Allison Perry.